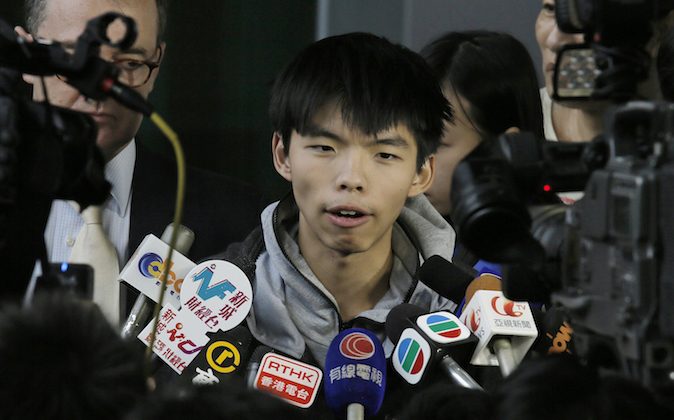 Prominent Hong Kong student protest leader Joshua Wong talks to reporters outside a court in Hong Kong Thursday, Nov. 27, 2014. Wong and other democracy protesters were arrested during a police operation to remove barricades from a protest camp in the unruly Mong Kok district. Wong was given bail and his case adjourned until January 14. (AP Photo/Vincent Yu)
China

HONG KONG—At age 14, he stepped into the spotlight to take on — and ultimately help defeat — Hong Kong authorities’ plans to launch a “national education” curriculum, calling it a ploy to brainwash the city’s youth with unquestioned support for the Chinese Communist Party.

Now, at 18, Joshua Wong is helping spearhead a mostly student-led protest movement that is pressing for greater democratic reforms in the semiautonomous Chinese territory.

Slender and serious, with a shock of shaggy black hair, Wong does not cut an imposing figure. He usually wears black eyeglasses and is often seen hunched over his smartphone — a key tool used by the young protesters to get their message out via social media and group chats.

Yet he carries himself with a maturity found in few teenagers and speaks concisely and with conviction while addressing crowds, microphone in hand. He is admired among supporters for being willing to speak up — and doing so articulately — at such a young age.

“He’s outstanding in leading the mass movement,” said Terry Ng, an insurance agent in his 30s who has joined some protests.

Wong has a power to inspire and get people to think critically about government policy, said Angel Chow, an 18-year-old high school student.

“He’s very young and he can lead a large amount of people to have a protest to the government,” she said. “It is not an easy job, I think.”

Wong has plenty of detractors. He has been attacked by pro-Beijing media in the city, including an article in the Wen Wei Po newspaper accusing him of working for the CIA.

This week, he and his lawyer were pelted with eggs by two men after he was arrested for a second time since the street protests began two months ago.

Wong, Lester Shum, another popular student leader, and about 150 others were detained Wednesday when police cleared out a protest site in the gritty Mong Kok neighborhood where demonstrators had often clashed with police, as well as angry residents. A Hong Kong court on Thursday banned him from going to that area. After paying HK$500 ($65) in bail, he was released and his obstruction case was adjourned until Jan. 14.

On leaving court, Wong showed journalists small cuts and bruises on his neck that he said came from police hitting him. He also said “they injured me six or seven times in my private parts.”

The arrests of Wong and Shum appear to reflect Hong Kong authorities’ attempts to sideline leaders of the movement amid increasing impatience from Beijing to shut down the protests that started in late September. Students and others have taken to the streets to oppose the Chinese central government’s decision that a pro-Beijing committee must approve all candidates running in the territory’s first direct election for leader, scheduled for 2017.

Wong played a key role in kick-starting those demonstrations when at a rally outside the government headquarters he spontaneously called on the crowd to storm a courtyard dubbed Civic Square. More than 100 people scaled a tall fence or pushed past a gate. Wong, Shum and other student leaders were arrested.

Public anger at the pair being held nearly the 48-hour legal limit without charge drove more people into the streets, where police responded by firing tear gas. That in turn boosted the protests that have come to be called the “Umbrella Movement,” a reference to the umbrellas demonstrators used as shields against pepper spray.

As the weeks have dragged on, the numbers of protesters camped out in the streets has dwindled, though barricades and tents remain in place at two other street encampments. The government held televised talks with student leaders — though Wong didn’t participate — but offered little in the way of concessions and has made little attempt to respond to demands.

Wong was raised a Christian in a middle-class family that nurtured his concern for social issues, with his father reportedly taking him on visits to the city’s less fortunate starting at the age of 6 or 7.

He graduated from a private Christian high school and this fall began going to the Open University of Hong Kong, having failed to get into the city’s more prestigious institutions because of mediocre college entrance exam results.

Wong first gained notoriety when in 2011 he started a group with some student friends called Scholarism to oppose the Hong Kong government’s plan to introduce Beijing-style “moral and national education” curriculum into the territory’s schools. Many residents viewed the move as an attempt to indoctrinate young people and inculcate support for the Communist government. After weeks of protests, authorities scrapped the plan.

Wong steadfastly believes it falls to the students to take the lead in pushing for change in Hong Kong, where the younger generation has become increasingly worried about its future because of widening inequality and the growing influence of mainland China on the former British colony.

“In different countries, in different generations it’s the same thing: students are always the ones who stand in the front line in democracy movements,” he told the AP in July. “Students have less pressure on their future, job or family. … They can stand more at the front compared to others.”

It remains to be seen what kind of impact Wong’s second arrest will have on the protesters, who find themselves cornered and exhausted and losing public support.

In a recording made before police cleared the Mong Kok protest area, Wong called for perseverance.

“The aim of the movement is to fight for results, not for an exit plan,” he said. “Even if I’m detained I hope everybody else will persist because we have no room to lose.”