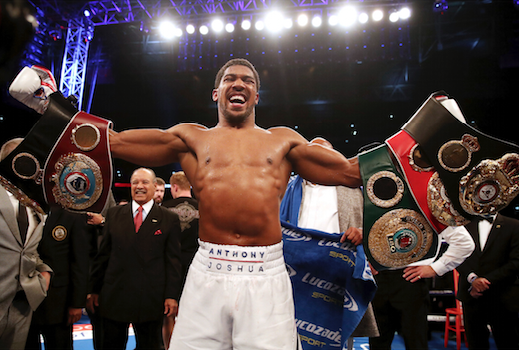 LONDON—With blood streaming out of his busted nose, Anthony Joshua was in deep trouble once more in front of 80,000 stunned spectators at Wembley Stadium.

Alexander Povetkin, a 39-year-old Russian with supposedly his best days behind him, was dominating heavyweight boxing’s new superstar with his powerful inside work and punching power.

Like 17 months ago when he was knocked down by Wladimir Klitschko in the same venue, Joshua was looking vulnerable. And just like that career-defining night, he came through.

Joshua slowly picked off a tiring Povetkin and delivered a brutal finish in the seventh round to retain his WBA, IBF, and WBO belt on Saturday.

“A few years ago,” Joshua said, “maybe I wouldn’t have won that fight.”

The end was emphatic, and trademark Joshua. A left hook left Povetkin open and Joshua followed through with a straight right that sent the challenger to the canvas. Povetkin had his head through the ropes at one point but he managed to get to his feet, only for Joshua to pile in with a flurry of punches that caused the referee to step in and stop the fight with 1:01 left in the round.

“There is a lot of pressure, the whole country is rooting for me,” said Joshua, whose phenomenal pulling power has seen him attract almost 400,000 spectators to his last five fights. “The energy in here spurs you on and you do feel that pressure, I’m not going to lie.”

Joshua’s record moved to 22-0, with 21 wins coming inside the distance. He is booked to return to Wembley on April 13 for his next bout, and the plan is for the opponent to be either WBC titleholder Deontay Wilder or former heavyweight champion Tyson Fury.

They confirmed earlier Saturday they will be fighting on Dec. 1, likely in Las Vegas.

Asked in the ring who his preferred opponent would be, Joshua said: “My No. 1 would be Wilder, let’s not talk about a No. 2 or 3.”

Selling the Povetkin fight was harder than usual for Joshua and his promoters, with the Russian boxer now at veteran status and conceding around 11 kilograms on the champion. Joshua was 1-10 to win with some British bookmakers.

On a rainy night that forced spectators at ground level to wear plastic ponchos as protection from the wet conditions, Joshua struggled in the early rounds and was rocked by a three-punch combination from Povetkin in the first.

Blood poured from Joshua’s right nostril and he might have lost rounds two and three, too, with Povetkin dangerous close in and with his fierce left hook.

“It’s a nice way to wake up and knew you’re in a tough fight,” Joshua said.

Using his long reach and fighting on the back foot, Joshua came back into the fight and Povetkin was looking for the big punch for the knockout.

Povetkin sustained a bad cut over his left eye in round four and was noticeably slowing up by the end of round five. He had no answer to Joshua’s barrage of punches in the seventh that set up the crowd-pleasing finish.

The Russian, who was the WBA “regular” champion from 2011-13, was getting a shot at a world title for the first time since testing positive for performance-enhancing drugs twice in a seven-month period in 2016.

Coming in the same week as his native Russia was welcomed back into global sporting competition by the World Anti-Doping Agency after a notorious doping scandal, the timing of the fight seemed apt.

And he put up a game fight, one which proved to be Joshua’s toughest test since Klitschko. It was the first time Povetkin was stopped inside the distance.