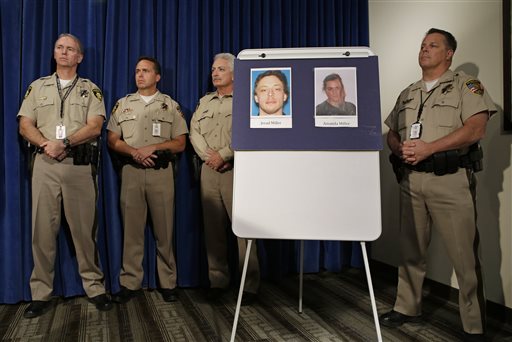 Pictures of suspects Jerad Miller and Amanda Miller are on display during a news conference, Monday, June 9, 2014, in Las Vegas. Police say two police officers, along with a bystander, were killed by Jerad and Amanda Miller yesterday. (AP Photo/John Locher)
US

Joseph Wilcox Died Trying to Take Down Las Vegas Shooters; Called a ‘Hero’ For His Actions

Joseph Robert Wilcox has been identified as the man who tried to stop the Las Vegas couple who started shooting people in a strip mall.

Wilcox , 31, was legally carrying a concealed pistol when he confronted Jerad Miller, who along with his wife Amanda Miller had just shot two police officers.

Police said that the pair left a neighbor’s apartment where they had been staying around 4:30 p.m. and walked to the strip mall, about five miles away. They walked into a CiCi’s Pizza and shot Alyn Beck, 41, and Igor Soldo, 31.

Pulling the mortally wounded officers from the booth, they took their guns and ammunition and put a yellow Gadsden flag featuring the phrase “Don’t tread on me” and a swastika on Beck’s body. The flag, with its roots in the American Revolution, is a symbol for anti-government groups. Police said they believe the swastika was intended to paint police as Nazis, not necessarily an expression of the Millers’ own white supremacist views.

The couple also told restaurant patrons that their act was “the beginning of the revolution,” the same message as a note they left at the restaurant. That was what the Millers told customers at a Wal-Mart about a block away, where the couple fled. Jerad Miller fired one round and “told the people to get out and this was a revolution and that the police were on the way.”

In the frenzy, Wilcox, who was shopping, told friends he was going to confront Jerad Miller — not realizing that Amanda Miller was his accomplice. Wilcox went from the checkout area to Miller and pulled his concealed firearm. But before he could fire, Amanda Miller shot him in the ribs and Wilcox collapsed.

“He had no idea the wife was walking behind him,” a police official added of the slain man to the Las Vegas Review Journal. “This guy (Wilcox) was not some idiot with a gun. To me, he was a hero. He was trying to stop an active shooter.”

Police confirmed that Wilcox was not able to get off a shot before he died.

By now, police had arrived, and two five-officer teams entered the massive store. Near the back, one team confronted the Millers, and exchanged fire. At one point, Jerad Miller tried to blast a rear emergency exit door open with a shotgun, but police had blocked it with a car and he could not escape.

Las Vegas Metropolitan Police Department officers are at the scene of a shooting Sunday, June 8, 2014 in Las Vegas. Police say two suspects shot two officers at a Las Vegas pizza parlor before fatally shooting a person and turning the guns on themselves at a nearby Walmart. (AP Photo/John Locher)

One officer went with store security to screens showing feeds from surveillance cameras and saw that Jerad Miller had built a makeshift barricade around his wife.

As police closed in, Amanda Miller shot her husband several times with a handgun, killing him. She then shot herself in the head. When officers arrived, she was still breathing, and was taken to the hospital. She later died.

In their last moments, the couple turned to each other and spoke, though it is unclear what they said.

Jerad had a lengthy criminal history dating back to 200 that included drug dealing charges and assault.

His wife appears to have had no criminal history, but was together with her husband in what he wanted to do.

In a post on her Facebook page from May 23, 2011, she wrote: “to the people in the world…your lucky i can’t kill you now but remember one day one day i will get you because one day all hell will break lose and i’ll be standing in the middle of it with a shot gun in one hand and a pistol in the other.”