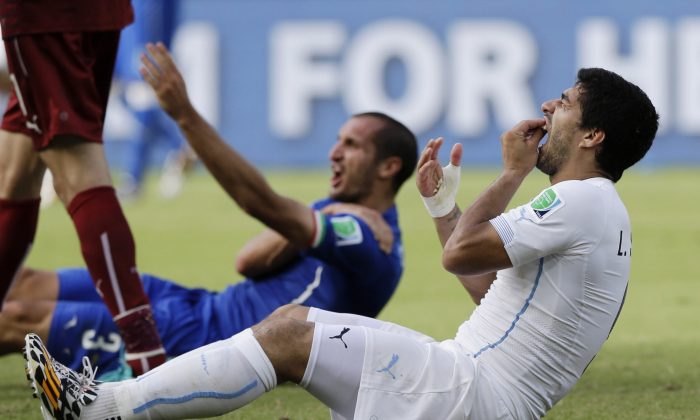 According to AFP, Mujica defended the star soccer player when he spoke with reporters on Wednesday night.

“I did not see him bite anyone. But they give each other so many kicks and blows and normally they put up with it,” he said. Suarez, he added, is “an excellent player.”

Suarez has been charged with biting another player by FIFA.

The matter is currently under investigation, and Suarez could be banned for at least two years.

RIO DE JANEIRO (AP) — As the world was judging Uruguay’s Luis Suarez for biting a player in the World Cup, his teammates, coaches and fans in his soccer-crazy country defended the star, blaming the foreign media, his Italian opponents and uneven treatment.

World Cup organizers scrambled Wednesday to quickly decide on a punishment before Uruguay plays Colombia Saturday in the round of 16.

“We have to resolve it either today or tomorrow,” FIFA disciplinary panel member Martin Hong told reporters Wednesday. “It’s our duty to see justice done.”

A day after he tangled with defender Giorgio Chiellini, Suarez was coping well, according to the Uruguay football federation president.

“Luis is fine. He’s been through 1001 battles,” Wilmar Valdez told the online site Tenfield.com. “We all know who Luis is and that’s why we have to defend him.”

Blatter, who was in the crowd for the Uruguay-Italy match at Natal, has pledged a zero tolerance for the darker side of the game.

Many are questioning where that leaves a player like Suarez, who has a history of disciplinary problems including separate bans of seven and 10 matches for biting opponents in the Netherlands and England.

Valdez said Uruguay officials were sent a video of the incident by FIFA, and would respond with footage showing Suarez — a striker for Liverpool and last season’s player of the year in England’s Premier League — as a victim of Italian aggression.

“When he falls, several substitutes insult him on the ground and some members of Italy’s staff even came out of the bench to try to hit him,” Valdez said, suggesting FIFA could investigate Italy.

Uruguay also will cite Brazil star Neymar getting only a yellow card in a clash with a Croatia player, Valdez said.

“This happened because there have been campaigns launched by the media in England and Italy,” Balbi told Uruguayan radio Sport 890.

“The British media has a vendetta against Suarez, and everyone knows that,” he said. “It’s obvious the vendetta sells newspapers in England, otherwise you wouldn’t be here. Uruguay and Italy played yesterday. On Saturday Uruguay plays Colombia, I don’t know why there’s a British journalist asking about Suarez.”

Lugano said he had seen “much more violent plays” than the bite at the World Cup.

“It was a normal taunt in football, and the world press ends up talking about something totally trivial,” he said.

FIFA’s case against Suarez — announced early Wednesday — will be managed by a Swiss lawyer, Claudio Sulser, chairman of the FIFA disciplinary committee. A former international forward himself, Sulser has worked for four years at FIFA, first as head of its ethics court.

Sulser can choose to judge the offense within the scale of typical red-card incidents: A three-match ban may then be appropriate, banishing Suarez at least until the World Cup final should Uruguay advance that far.

The maximum penalty would be a ban of 24 international matches.

FIFA can also choose to ban Suarez for up to two years. That would cover club and international games and would ruin a widely speculated transfer to Barcelona or Real Madrid.

Suarez and the Uruguay football federation had until 5 p.m. local time Wednesday (4 p.m. EDT/2000 GMT) to present a documented defense.

Completing the case ahead of Saturday’s match could be complicated if Suarez appeals. That challenge could go direct to the Court of Arbitration for Sport in Switzerland for an urgent and binding ruling.

However, one option open to FIFA and Sulser to avoid that scenario is that a suspension of “fewer than three matches or of up to two months” cannot be appealed, according to FIFA rules.

Already, one of Suarez’s sponsors said it was “reviewing our relationship with him.”

“We will not tolerate unsporting behavior,” 888poker said in a Twitter message.

adidas, which also has Suarez as a client and is FIFA’s longest standing World Cup sponsor, said it was monitoring the case.

Meanwhile, Suarez was criticized by a Uruguay football great Alcides Ghiggia, the last survivor of the team which defeated Brazil to win the 1950 World Cup.

Suarez “plays well but he has done things that are not normal for a player nor for a soccer game,” Ghiggia told The AP. “I think FIFA can sanction him.”