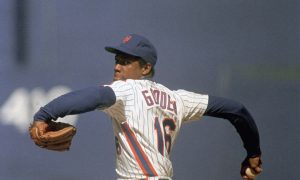 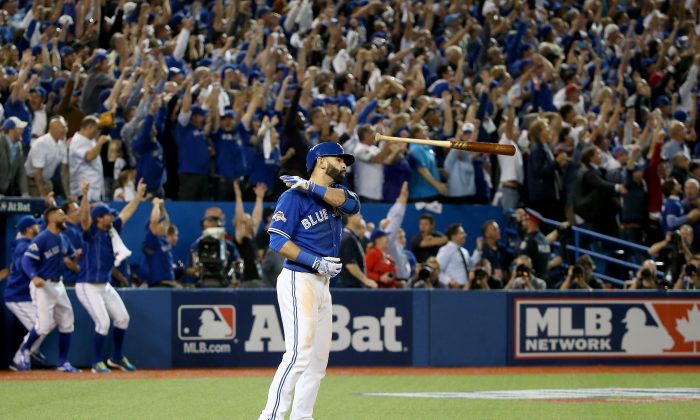 There have been many bat flips in the history of baseball, but none was more emphatic than Toronto slugger Jose Bautista’s flip in Game 5 of the ALDS against Texas last fall.

Now that image is captured on his 2016 Topps card.

In case you missed it last fall, here’s video of the ‘flip’ heard around the world.

While plenty of players have flipped their bats after a home run, Bautista’s blast was no ordinary blast.

First, it was a go-ahead shot in the winner-take-all game of the best-of-five ALDS—always a pressure-packed game.

Secondly, the home run capped off a comeback that ended perhaps the craziest inning in baseball postseason history.

The Blue Jays—the favorites to win the American League pennant if not the World Series—lost the first two games of the series at home. Then they went to Texas and swept both games there, setting up the win-or-go-home Game 5 at the Rogers Centre in Toronto.

After six innings the game was deadlocked at two runs a piece.

Then in the top of the 7th, the Rangers took the lead on one of the crazier plays in baseball.

With a runner at third base, Rangers outfielder Shin-Soo Choo took Aaron Sanchez’s 1-2 delivery for a ball, but when catcher Russell Martin threw the baseball back to the pitcher, the ball instead ricocheted off Choo’s bat (who was still in the batter’s box) and bounced toward third base. The runner on third, Rougned Odor, alertly raced home and scored.

Originally ruled a dead ball, the umpiring crew huddled and declared it a live ball and allowed the go-ahead run to score—much to the dismay of the Toronto crowd, who started throwing beer cans and bottles onto the field in disgust.

Then in the bottom half of the inning, Toronto’s first three hitters reached base—all via infield errors by the Rangers defense.

With one out and the bases still loaded, Blue Jays third baseman Josh Donaldson blooped one over the second baseman’s head to score a run and tie the game at three. The runner at first was forced out at second though, so when Bautista stepped to the plate, there were two outs and two on.

Bautista then crushed Rangers reliever Sam Dyson’s third pitch off the second deck in the left-center field, much to the crowd’s delight and Toronto held on for a 6–3 win.