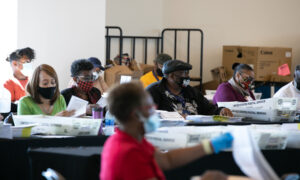 Jorgensen: Trump Should Take Complaints to Court If There Are Credible Election Irregularities

Libertarian 2020 presidential candidate Jo Jorgensen said Monday that if there are credible allegations of election irregularities, President Donald Trump should take his complaints to court.

In an interview with The Epoch Times’ “American Thought Leaders” program, Jorgensen suggested that many Americans could be left unhappy if media projections that declared former vice president Joe Biden as the winner of the election turn out to be incorrect, amid mounting legal challenges by the Trump campaign.

Jorgensen, a psychology lecturer at Clemson University, received over 1.7 million votes or about 1.2 percent of the popular vote—securing more votes, and a higher percentage of the vote, than all twelve presidential campaigns in the party’s history, except one.

Biden, as well as a number of media outlets, on Nov. 7 declared that he had won the presidential election. With ongoing counts and pending recounts, Trump has rejected Biden’s declaration, claiming that fraud is the reason for Biden’s lead in several states.

The Trump campaign has announced legal challenges in several states.

“We’ve got a court system for a reason, and we’ve got many problems with our country. … I see nothing wrong with people who have a legitimate complaint taken to a court. And we’ll just see what the court does,” Jorgensen said.

“My concern is that of course, what if it turns out that there were irregularities. What if Trump really is the president, after the media have told everybody that Biden appears to be the winner?” Jorgensen continued.

“Now there’s going to really be a lot of unhappy people, because after being told one thing and then have it yanked out from under you, I mean, that’s not a good situation.”

The Libertarian’s candidates remarks came as Attorney General William Barr authorized federal prosecutors across the country to “pursue substantial allegations” of voting irregularities, according to media reports citing what appears to be a leaked memo obtained by The Associated Press.

“I authorize you to pursue substantial allegations of voting and vote tabulation irregularities prior to the certification of elections in your jurisdictions in certain cases, as I have already done in specific instances. Such inquiries and reviews may be conducted if there are clear and apparently credible allegations of irregularities that, if true, could potentially impact the outcome of a federal election in an individual State,” read part of the 2-page internal memo.

The memo was sent to U.S. attorneys, assistant attorneys general for the criminal division, civil rights division, national security division, and the director of the FBI.

“Any investigation of claims of irregularities that, if true, would clearly not impact the outcome of a federal election in an individual State should normally be deferred until after the election certification process is completed. While U.S. Attorneys maintain their inherent authority to conduct inquiries and investigations as they deem appropriate, it will likely be prudent to commence any election-related matters as a preliminary inquiry so as to assess whether available evidence warrants further investigative steps.”

Jorgensen suggested that the media could be setting “unrealistic expectation levels” in declaring Biden President-elect before results are certified by state legislatures and the Electoral College.

“If I were Trump, and I thought there were irregularities, I would certainly go to court to present my case. That’s what the American way is all about,” Jorgensen added.

The Epoch Times Editorial Board will not declare a winner until all results are certified and any legal challenges are resolved across the country.