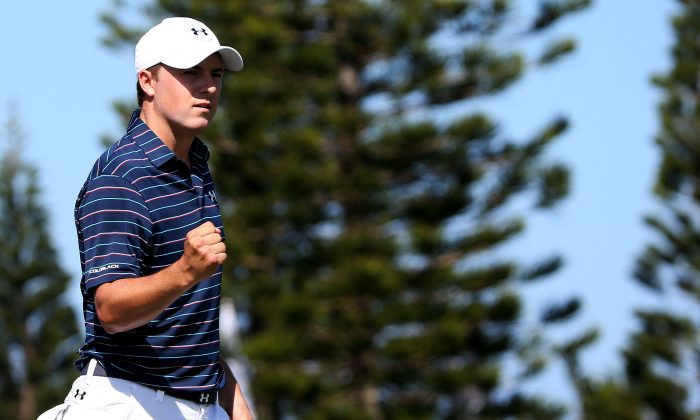 Jordan Spieth reacts after putting for birdie on the second green during the final round of the Hyundai Tournament of Champions at the Plantation Course at Kapalua Golf Club on Jan. 10. (Sam Greenwood/Getty Images)
Golf

It’s been said many times in all sports that climbing the way to the top is one thing—staying there quite another. Even more telling is when athletes have sensational years and face the daunting task in trying to match or even surpass what they have done the year prior. Jordan Spieth’s golf year in 2015 rivals anything done previously in the sport. The then 21-year-old won five times—two of them majors—and coming as close as any golfer has ever done in winning all four of golf’s major championships, missing out on a playoff at The Open at The Old Course at St. Andrews by one stroke and finishing second to Australian Jason Day in the PGA Championship.

Even more telling than Spieth’s golf prowess is his unrivaled manner in dealing with the pressures that come with attaining the world number one ranking. Chronology may say the young man from Texas is now 22, but his mental strength shows a seasoned quality veterans are envious in what he’s been able to consistently do.

After earning Player-of-the-Year honors it would not have seemed implausible for Spieth to show a bit of competitive rust when entering this first PGA Tour event in 2016—the Hyundai Tournament of Champions at Kapalua’s Plantation Course in Maui, Hawaii.

Spieth made a statement with clubs that was totally unmistakable—cumulatively scoring -30 on rounds of 64,66,65,and 67—and winning the event by eight strokes. His comments following the event indicated a clear mindset. Jordan said it was not a new year but one continuing from what he did so marvelously from ’15. Interestingly, Spieth matched Tiger Woods in winning his 7th PGA Tour title at 22 years of age but the Texan was quick to state any link between the two is purely conjecture from others—not him.

Humility is part of Spieth’s DNA, but equally seeded is his fierce determination—a desire to stay in the moment and not get too wrapped up in celebrating prematurely. Golf can be a most humbling game. Jordan found that out firsthand when he missed back-to-back cuts in the first two playoff events last year—The Barclays and Deutsche Bank tournaments respectively. Others might have had their confidence rocked, not him. Spieth merely gathered his competent team and did what he did best—work things out and show a resilience that is second to none in the game. Winning The Tour Championship was the ultimate exclamation point on an incredible 2015 season.

The Spieth game flies in the face of the growing escalation of power players. Tour players such as Dustin Johnson personify this type of approach. Long drives may excite the masses in any gallery, but finishing out a hole with an uncanny stroke is often vastly underappreciated by many save for Jordan’s peers.

Think of NBA comparisons. Spieth plays the role of Stephen Curry. Both stars have reshaped the debate on what it means to be a dominant player and what elements make that happen.

Nothing can dramatize that better than watching both Spieth and Johnson handle the par-5 72nd hole of last year’s U.S. Open at Chambers Bay. Spieth, coming off a double-bogey on the penultimate hole, played a pressure packed drive and 3-metal onto the green and then deftly proceeded to two-putt for birdie on the mega-slick putting surface putting him one ahead of Johnson. Dustin produced a mega-distance drive that left him only a 5-iron to the green. Johnson hit his approach to 15-feet and then inexplicably three-putted to lose by one. Spieth has resurrected the old time golf axiom that, “you drive for show and putt for dough.” How that scar tissue will impact Johnson, as he searches for his first major, will be another story line worth watching this year.

Lessons Learned: Looking Back Golf in 2015

Spieth doesn’t win golf tournaments by bludgeoning golf courses into submission with massive drives that leave galleries with their mouths agape. The Texan’s formula is the flip side of what a younger Tiger Woods so majestically did when he entered the ranks of professional golf in late ’96 and was highlighted by his devastating win in the ’97 Masters. Spieth’s game is precision golf—knowing totally what he can and cannot do and then having the total confidence in executing under top tier pressure. Think of last year’s conclusion to the third round at Augusta. Spieth had missed the final green to the way right and was left with a delicate short shot. In the waning moments of that round it appeared Spieth was wobbling and many began to wonder if the young golfer would finish weakly and have mega doubts heading into Sunday’s final round—similar to what he showed in the final round of the ’14 Masters.

A prudent play would have been to advance the ball onto the green and likely make bogey. Not Spieth. Jordan played a most precise flop shot off a very tight lie and easily secured his par. Few players would have considered the shot—even fewer would have the dexterity to pull it off. That demonstration showed many Jordan had the wherewithal to produce top tier golf when the situation called upon it.

Professional golf is now blessed with an array of top tier young players—Northern Irishman Rory McIlroy along with the likes of Day—showed clearly the golf storyline goes beyond what Woods and Phil Mickelson did for so many years.

The element that pushes Spieth to the top of the world rankings is his insatiable hunger to win. Jordan is now demonstrating to all other pursuers that when he grabs the lead—mirroring what Tiger did for so many years—he’s not going to easily give it up.

Winning two majors and Player of the Year honors places the bulls-eye squarely on his shoulders. But what the win at Kapalua said louder than anything words alone can say is that Jordan Spieth is intent on staying at the top for a long time. No question competitors such as McIlroy, Day and a host of others will be pushing their names to the top of the golf ladder as well and the resulting comings and goings will likely produce stellar golf for all to see.

Spieth came of age watching Woods dominate like no other golf has ever done in the most recent past. Tiger, at his height, was winning nearly 25 percent for every time he teed it up. No one in golf has ever come close to that kind of consistency. Spieth saw the single-minded pursuit that Woods applied—winning was what mattered, the rest is just conversation.

Interestingly, Spieth said in his post press conference he wanted to show all others he handle the lead and can finish off events. Once he secures the lead he’s not going to ease the pedal on the gas and can finish strong. The Jordan juggernaut is in the fast lane. As Bette Davis playing Margo Channing said so eloquently in the delicious movie, ‘All about Eve,’— “Fasten your seat belts it’s going to be a bumpy night.”