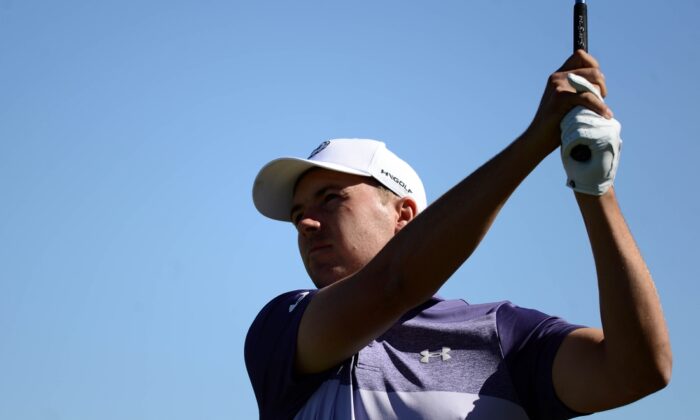 Jordan Spieth tees off on the seventh during the first round of the CJ Cup golf tournament, in Las Vegas, Nev., on Oct. 14, 2021. (Joe Camporeale/USA TODAY Sports via Field Level Media)
Golf

Jordan Spieth returned to the top 10 in the Official World Golf Ranking on Monday despite taking the past two weeks off.

The former World No. 1 rose three spots in the rolling ranking system, passing Brooks Koepka, Hideki Matsuyama and Tony Finau. It’s a notable accomplishment for Spieth, who fell as low as 92nd after missing the cut at the Farmers Insurance Open in February.

He has teed it up in 19 stroke play events since, winning the Valero Texas Open and posting a pair of runner-ups along with six other top-10 results. Spieth also went 1-2-1 during Team USA’s dominating Ryder Cup victory over Team Europe in September.

Spieth, 28, has only made one start during the fall swing thus far, tying for 18th at The CJ Cup @ Summit in Las Vegas two weeks ago. He also is not in the field at this week’s Mayakoba Classic.

Lucas Herbert, who claimed his first PGA Tour victory at the Butterfield Bermuda Championship, shot up eight spots to a career-best No. 43. Patrick Reed moved up two spots to No. 22 with his tie for second along with Danny Lee, who rose 52 places to No. 229.

Taylor Pendrith, who was unable to capitalize on a three-shot lead after 54 holes, still vaulted 30 spots to 203rd.

Spieth was the only movement within the top 10, with Jon Rahm maintaining his comfortable cushion at No. 1 over Collin Morikawa and Dustin Johnson.