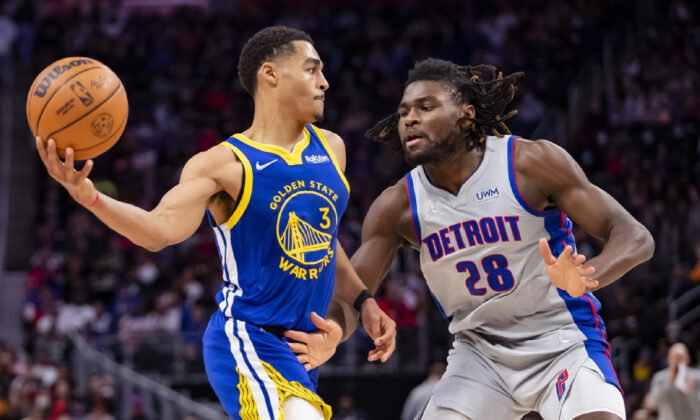 Jordan Poole Goes for 32 as Warriors Win in Detroit

Jordan Poole scored a season-high 32 points and the shorthanded Golden State Warriors (+4) held off the host Detroit Pistons 105–102 on Friday.

Andrew Wiggins had 27 points and Nemanja Bjelica tossed in 14 off the bench. Gary Payton II added 12 points for the Warriors.

Golden State was missing several key players, including two-time Most Valuable Player Stephen Curry. The league’s leading scorer at 29.5 points per game, Curry did not play due to a left hip contusion. Draymond Green was inactive due to a right thigh contusion, while Andre Iguodala (right knee soreness) and Otto Porter Jr. (left foot injury management) also sat out.

Pistons center Isaiah Stewart suffered a right ankle injury contesting a shot early in the second half and did not return.

Golden State led 17–4 midway through the first quarter as Detroit missed 10 straight shots. Poole finished the quarter with 11 points, but Detroit pulled within 26–23 by period’s end.

Poole matched that total in the second quarter as the Warriors carried a 56–51 lead into the second half. Jackson provided the spark for the Pistons with 16 first-half points off the bench.

The Warriors led by six midway through the third quarter, then reeled off seven unanswered points.

Chris Chiozza’s 3-pointer with the shot clock expiring gave the Warriors an 81–68 advantage late in the quarter. He drained another one in the closing seconds as Golden State carried an 86–70 lead into the fourth.

Bjelica’s layup two minutes into the final period made it 91–77. Poole reached the 30-point mark with a reverse layup with 4:58 left to give Golden State a 101–87 lead. He surpassed his previous season high of 31 points when he made a baseline runner with just over three minutes left.