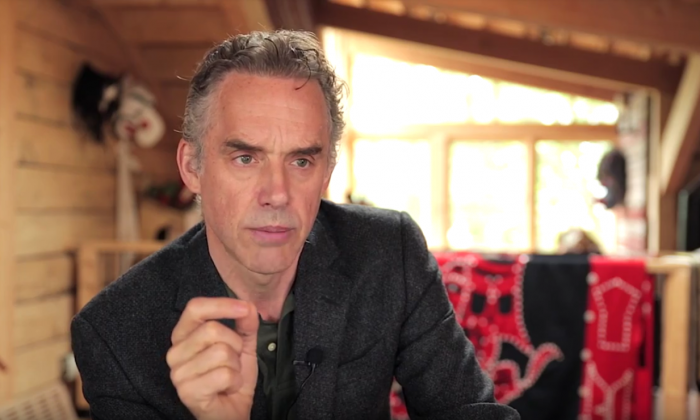 Jordan Peterson, Canadian clinical psychologist and professor of psychology at the University of Toronto, explains the communist roots of postmodernism during an interview on June 15. (The Epoch Times)
The Dead End of Communism

Communism was not popularized in the West under the direct banner of communism. Instead, it came largely under the banner of postmodernism, and aimed to transform the values and beliefs of our societies through its Marxist idea that knowledge and truth are social constructs.

Under it, a new wave of skepticism and distrust was applied to philosophy, culture, history, and all beliefs and institutions at the foundations of Western society.

The postmodern philosophy “came into vogue” in the 1970s, according to Jordan Peterson, Canadian clinical psychologist and professor of psychology at the University of Toronto, “after classic Marxism, especially of the economic type, had been so thoroughly discredited that no one but an absolute reprobate could support it publicly.”

Peterson said it’s not possible to understand our current society without considering the role postmodernism plays within it, “because postmodernism, in many ways—especially as it’s played out politically—is the new skin that the old Marxism now inhabits.”

“Even the French intellectuals had to admit that communism was a bad deal by the end of the 1960s,” he said. From there, the communists played a “sleight of hand game, in some sense,” and rebranded their ideology “under a postmodern guise.”

“That’s where identity politics came from,” he said. And from there, it “spread like wildfire” from France, to the United States through the English department at Yale University, “and then everywhere.”Marxism preached that the natural and economic landscape is a battle between the so-called proletariat and the bourgeois. It claimed that economic systems were going to enslave people and keep them down, Peterson said.

In practice, however, communism repeatedly showed it made things worse. It was put into place in many parts of the world throughout the 20th century “with absolutely murderous results,” Peterson said. “It was the most destructive economic and political doctrine I think that has ever been invented by mankind,” surpassing even the terror seen under Adolf Hitler, with its system of murder that would kill over 100 million people in less than a century.

Peterson said the “full breadth of that catastrophe” of communism is something students rarely learn in school. “The students I teach usually know nothing at all about what happened in the Soviet Union under Stalin and Lenin between 1919 and 1959. They have no idea that millions, tens of millions, of people were killed and far more tortured and brutalized by that particular regime—to say nothing of Mao.”

By the end of the 1960s, he said, even French intellectuals like Jean-Paul Sartre had to admit that the communist experiment—whether under Marxism, Stalinism, Maoism, or any other variant—was “an absolute, catastrophic failure.”

Rather than do away with the ideology, however, they merely gave it a new face and a new name. “They were all Marxists. But they couldn’t be Marxists anymore, because you couldn’t be a Marxist and claim you were a human being by the end of the 1960s,” said Peterson.

The postmodernists built on the Marxist ideology, Peterson said. “They started to play a sleight of hand, and instead of pitting the proletariat, the working class, against the bourgeois, they started to pit the oppressed against the oppressor. That opened up the avenue to identifying any number of groups as oppressed and oppressor and to continue the same narrative under a different name.”

“And so since the 1970s, under the guise of postmodernism, we’ve seen the rapid expansion of identity politics throughout the universities,” he said. “It’s come to dominate all of the humanities—which are dead as far as I can tell—and a huge proportion of the social sciences.”

And so since the 1970s, under the guise of postmodernism, we’ve seen the rapid expansion of identity politics throughout the universities.
— Jordan Peterson, professor of psychology at the University of Toronto

“We’ve been publicly funding extremely radical, postmodern leftist thinkers who are hellbent on demolishing the fundamental substructure of Western civilization. And that’s no paranoid delusion. That’s their self-admitted goal,” he said, noting that their philosophy is heavily based in the ideas of French philosopher Jacques Derrida, “who, I think, most trenchantly formulated the anti-Western philosophy that is being pursued so assiduously by the radical left.”

“The people who hold this doctrine—this radical, postmodern, communitarian doctrine that makes racial identity or sexual identity or gender identity or some kind of group identity paramount—they’ve got control over most low-to-mid level bureaucratic structures, and many governments as well,” he said. “But even in the United States, where you know a lot of the governmental institutions have swung back to the Republican side, the postmodernist types have infiltrated bureaucratic organizations at the mid-to-upper level.”