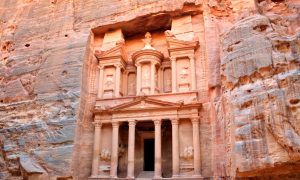 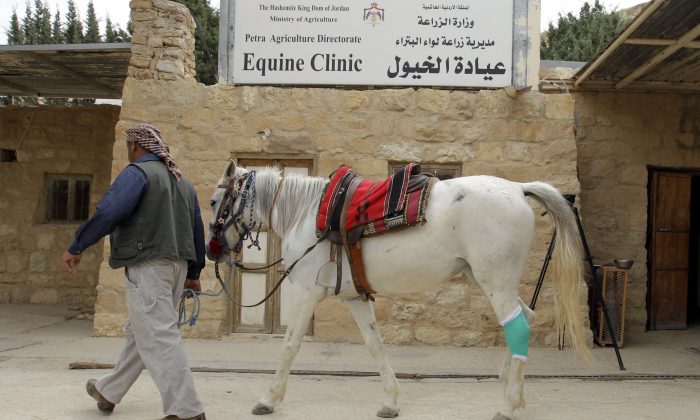 A man and his horse, used for transporting, walk past an equine clinic at the ancient city of Petra in Jordan on March 25th, 2015. Four Paws and the Jordanian Princess Alia Foundation (PAF) work for the improvement of the health and working conditions of horses and donkeys in Petra, providing veterinary treatment and training for the owners. (KHALIL MAZRAAWI/AFP/Getty Images)
Animals

Under new regulations seen by AFP on Tuesday, May 10th, any owner who exhausts or mistreats animals in future faces having permission to work at the site withdrawn.

More than 1,300 horses and donkeys work at the fabled rose red city hewn from rock, an attraction which also provides a living for some 8,000 people.

Owners who make animals gallop or bear too heavy a weight now face being sanctioned under the new measures.

In March last year, the Vienna- based international animal charity Four Paws and Jordan’s Princess Alia Foundation began a project aimed at improving the lives of the working animals at Petra.

Stables and shaded rest areas were created at the entrance to the huge site, and a clinic to treat injured horses and donkeys was renovated and equipped.

“A lot of people in Europe called us and complained about the situ- ation here in Petra with horses. Two years ago, more or less, it was a disaster,” said Four Paws president Heli Dungler, who visited the site along with Princess Alia to inspect the changes.

The animals now have somewhere to rest, eat, and drink.

“Here they can recover and regain their strength,” he said.

“Along with the new regulations, this has allowed us to take the first steps to improving conditions for the horses working in Petra.”

Princess Alia, who has a keen interest in animal welfare, said she hoped the animal owners would cooperate and respect the new rules.

“There will be no results if they don’t,” she said.

The changes at Petra should help to improve the image of the site, where the number of visitors has dropped by a third in five years.

Despite its abundance of natural wonders, Jordan’s tourism industry has been hard hit by the country’s proximity to regional conflicts in two of its neighbours, Iraq and Syria.