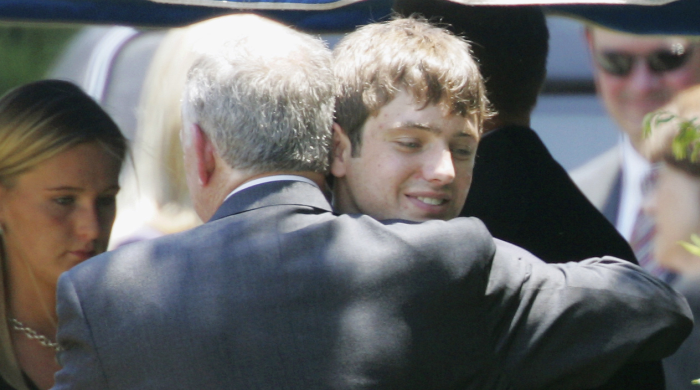 In this June 29, 2006, file photo, John Ramsey hugs his son, Burke (facing camera) at the graves of his wife, Patsy, and daughter, JonBenet, during services for his wife at the St. James Episcopal Cemetery in Marietta, Georgia. Burke Ramsey sued CBS and others for $750 million over a series that aired in September 2016 that Ramsey alleges concluded he killed his sister. (AP Photo/Ric Feld, File)
Entertainment

The older brother of JonBenet Ramsey is suing CBS and others for $750 million, saying his reputation was ruined after a television series that concluded he killed his 6-year-old sister two decades ago.

In the lawsuit filed Wednesday, Burke Ramsey claims that the network, its production company and the experts interviewed in the six-part series on the unsolved murder conspired to defame him for publicity and profit. The six-part television docuseries “The Case of JonBenet Ramsey” aired in September ahead of the 20th anniversary of JonBenet’s death.

The beauty pageant star was found dead in the basement of her family’s home in Boulder, Colorado, the day after Christmas in 1996.

A prosecutor cleared her parents and brother in 2008 based on DNA evidence. But the district attorney currently overseeing the case has said it was premature to exonerate the Ramseys and ordered additional tests using new DNA testing technology that authorities hope will further the investigation.

Older brother of JonBenet Ramsey suing CBS and others for $750 million over series that insinuated he killed sister. https://t.co/Fh7k1vo8AW pic.twitter.com/R0Ryb0siZg

Police have collected and studied thousands of pieces of evidence and say the case remains open.

CBS spokesman Dustin Smith declined to comment on the lawsuit, which is the second Burke Ramsey has filed over the television series.

In October, Ramsey, 29, sued a forensic pathologist featured on the show who said he bludgeoned his sister to death. The pathologist is also named in the latest lawsuit, which was filed in Michigan, where Burke Ramsey lives.

The new lawsuit says CBS and its featured experts set out to conduct a “sham reinvestigation” of the murder with “the preconceived the story line” that Ramsey killed his sister and conspired with his parents to cover it up.

“The accusation that Burke Ramsey killed his sister was based on a compilation of lies, half-truths, manufactured information, and the intentional omission and avoidance of truthful information about the murder of JonBenét Ramsey,” the lawsuit says.