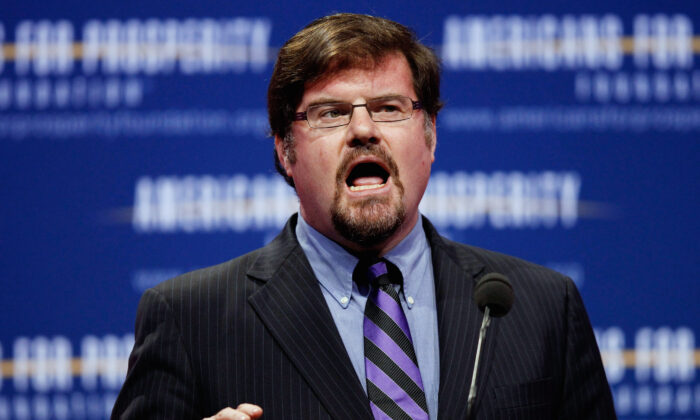 Jonah Goldberg, then of the National Review, is seen in Washington in a 2011 file photograph. (Chip Somodevilla/Getty Images)
Media & Big Tech

Fox News commentators Jonah Goldberg and Stephen Hayes have quit the network, saying they’re upset over a documentary about Jan. 6 that was produced by Tucker Carlson. Fox says their contracts, which were about to expire, were not going to be renewed.

“With the release of ‘Patriot Purge,’ we felt we could no longer ‘do right as we see it’ and remain at Fox News. So we resigned,” they wrote in a joint post at The Dispatch, where both work.

“Patriot Purge” is a documentary series from Carlson about what took place on Jan. 6, when protesters and rioters breached the U.S. Capitol in Washington, interrupting a joint session of Congress that was certifying electoral votes.

A preview released earlier this month quotes officials and media personalities comparing the breach to the Sept. 11, 2001, terrorist attacks, which Carlson argues is part of “pushing the lie of a domestic white terror army.”

“Jan. 6 is being used as a pretext to strip millions of Americans, disfavored Americans, of their core constitutional rights, and to defame them as domestic terrorists,” he said, adding that some of what has been promoted about what happened is untrue.

Goldberg and Hayes, part of a small group of conservatives who opposed former President Donald Trump for most of his time in office, said they see the documentary as part of a pattern at Fox of amplifying “false claims” and “bizarre narratives” of Trump.

“‘Patriot Purge’ creates an alternative history of January 6, contradicted not just by common sense, not just by the testimony and on-the-record statements of many participants, but by the reporting of the news division of Fox News itself,” they wrote.

Both men joined Fox in 2009. They primarily appeared on “Fox News Sunday” and “Special Report.”

A Fox executive told The Epoch Times in an email that the network had no intention of re-signing Hayes or Goldberg when their contracts came up in 2022.

The resignations drew praise from some, including Reps. Adam Kinzinger (R-Ill.) and Liz Cheney (R-Wyo.), who have both repeatedly attacked Trump in recent months.

Cheney said on Twitter that the men were “standing up for truth and calling out dangerous lies.”

Others panned the move, including Carlson, who sent out a promotion of the documentary that described it as the series “that drove Jonah Goldberg to an impotent rage.”

“Thank you to Jonah Goldberg and Steve Hayes for putting us out of our misery; now we don’t have to be accosted by your illogical and nonsensical takes while watching Fox News,” said Jennifer Van Laar, managing editor of Red State.