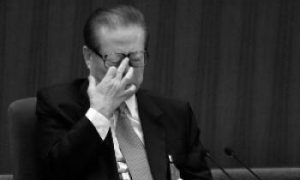 Jon Stewart, at the start of The Daily Show on Comedy Central Monday night, wasn’t his normal comedic self but addressed the Arizona shooting over the weekend.

“The events this weekend in Arizona weigh heavily,” he opened.

Stewart noted that as his show deals more and more with current events, certain incidents like the shooting in Arizona, which left six dead and more wounded, would not be appropriate to make fun of.  Among those critically wounded are Rep. Gabrielle Giffords, who was shot in the head.

“I can give you a typical compilation of the news excesses, but it doesn’t really seem appropriate,” he said.

Stewart instead attempted to evaluate the shootings that took place on Saturday. Media reports have claimed that the suspect Jared Loughner was influenced by politics.

"We live in a complex ecosystem of influences and motivations, and I wouldn't blame our political rhetoric any more than I would blame heavy metal music for Columbine,” he said, dispelling the idea that pundits like Glenn Beck or Sarah Palin influenced the shooter in any way.

Stewart said that the shooter was more mentally disturbed than anything else.

He added, "To have the feeling, however fleeting, that this type of event can be prevented forever. But it's hard not to feel like it can't. You cannot outsmart crazy … crazy always seems to find a way. It always has."

He added that there is a silver lining to the event: an innumerable amount of good deeds that were done for the victims of the shootings.

“You realize people that you don't even know and have never even met are leading lives of real dignity and goodness,” he said. “And you hear about crazy, but it is rarer than you think."