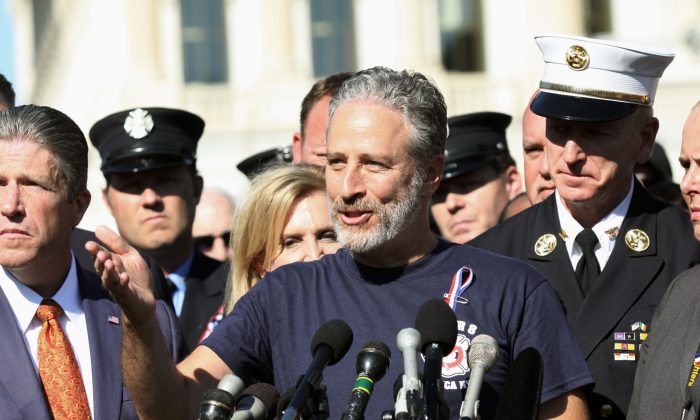 Comedian Jon Stewart stands with New York City first responders and speaks during a rally on Capitol Hill in Washington, Wednesday, September 16, 2015, calling for the extension of the the Zadroga Heath & Compensation Act that provides health care and compensation to 9/11 first responders and victims will come to an end if not renewed by Congress. (AP Photo/Lauren Victoria Burke)
Politics

While former “Daily Show” host Jon Stewart is notably not a fan of President-elect Donald Trump, he said in a recent interview that the people who voted for him are not racist.

Stewart, who engaged in a very public feud with Trump before he announced his candidacy, conducted an interview with The New York Times to promote his new book, “The Daily Show (The Book): An Oral History as Told by Jon Stewart, the Correspondents, Staff and Guests,” but the discussion quickly turned to the 2016 election and Trump.

He lambasted media reports, celebrities, and others who painted Trump supporters with a broad brush in labeling them racist, while identifying the kind of people that actually voted for the president-elect.

“And I’ll say this, I know a lot of first responders. I spent a lot of time in that community. A [expletive]-load of them voted for Trump,” he said on “TimesTalks” on Nov. 30, according to a Huffington Post transcript.

He elaborated: “The same people that voted for Trump ran into burning buildings and saved whoever the [expletive] they could no matter what color they were, no matter what religion and they would do it again tomorrow.”

Later, he touched on claims that Trump voters are giving into a system of institutional racism.

“So, if you want to sit and tell me that those people are giving tacit approval to an exploitative system—I say, ‘OK, and would you put your life on the line for people who aren’t like you? Because they did,'” he added.

Stewart made similar claims on CBS about the “demonization” of Trump’s supporters following Election Day.

“This has to stop. This idea that we’re all … that our team is perfect and the other team is demons,” he said. “And this is not like a Kumbaya, let’s all get along. Let’s [expletive] fight, but let’s fight with precision and integrity, and not with just demonization.”

Regarding President Obama’s tenure, Stewart said he aligned with him politically but doesn’t understand some of his policies.

“I thought they were terrible for press freedom. I still am not quite sure I understand a centralized policy of spying and droning,” he said on “TimesTalks.”

“There will be real victims of the policies over the next four years, but there were real victims, like Barack Obama’s administration deported more people than any in history,” he added. “That was real and whether we took comfort in the fact that he was one of the good guys that did that, real people paid a price for that. And you have to care about that, even if it’s one of your guys that did that.”