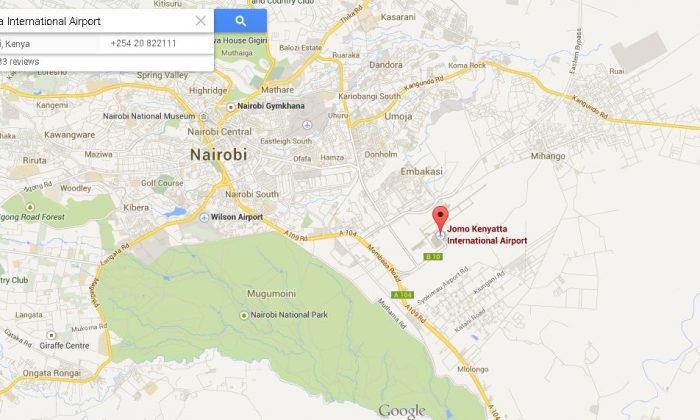 UPDATE: The fire has been put out and the cause is being investigated, according to the Kenya Airports Authority.

Although there was no loss of life, “There has been serious disruption of the aviation operations at the airport,” said Manoah Esipisu, secretary communication & state house spokesperson, in a statement released at about 2 p.m. in Kenya (EAT), or 7 a.m. EDT.

“Contingency measures have been put in place to stabilise the situation and to return the airport to normal operations,” said Espisu.

President Uhuru Kenyatta visited the scene in the morning and regrets the inconvenience of the thousands of passengers delayed and disrupted by the fire.

The fire quickly swelled and engulfed the arrival hall at Kenya’s main international airport Wednesday, an official said, shutting down East Africa’s largest airport and forcing the cancellation of dozens of flights.

By late Wednesday, the airport re-opened for domestic and cargo flights, an official said.

The Jomo Kenyatta International Airport in Nairobi has been closed and evacuated after a fire and only emergency vehicles and teams are allowed on the grounds until further notice.

The Kenya Airports Authority said on its Facebook page that a fire is affecting several buildings. The KAA Fire and Rescue Team, the G4S, and the Nairobi Fire Brigade are battling the fire.

Pictures posted on Twitter show a fire raging at the airport.

Reporters at the scene described the blaze as huge and said it appeared the fire had gutted the international arrivals area, where passengers pass through immigration and retrieve their luggage.

Stranded passengers stood on sidewalks outside the airport holding their luggage.

Inbound flights have been rerouted to other Kenyan airports.

Mutea Iringo, a senior official at the interior and national co-ordination ministry, told Capitol FM that it is “a serious fire” and “We are doing everything possible to avert a crisis.”