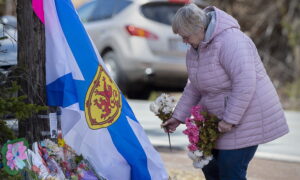 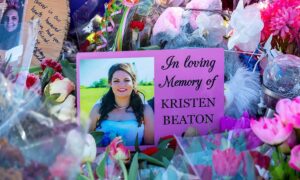 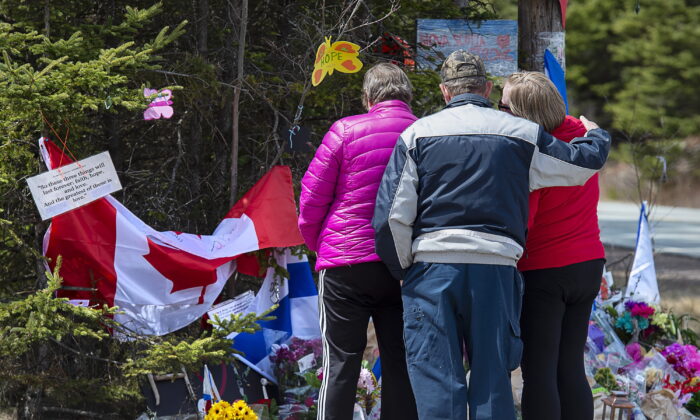 A family pays their respects to victims of the mass killings at a checkpoint on Portapique Road in Portapique, N.S. on April 24, 2020. As pressure mounts on the federal and Nova Scotia governments to call an inquiry into one of the worst mass killings in Canadian history, the country's leading scholar on inquiries says Ottawa and the province should do the right thing and work together on a joint inquest. (Andrew Vaughan/THE CANADIAN PRESS)
Canada

HALIFAX—As pressure mounts on the federal and Nova Scotia governments to call an inquiry into one of the worst mass killings in Canadian history, the country’s leading scholar on inquiries says Ottawa and the province should do the right thing and work together on a joint inquest.

“I think that would really be the course to take,” said Ed Ratushny, a professor emeritus at the University of Ottawa’s law school.

“It would make a lot of sense for the two governments to sit down together and work out terms of reference that are complementary … and cover all the issues that have to be covered.”

Since the April 18−19 rampage that killed 22 people, calls for a public inquiry have grown—from opposition politicians, from Dalhousie University law professors and from victims’ relatives. On Sunday, the family of one victim appealed to governments to call an inquiry.

“We are now 40 days past this tragic event, we aren’t able to heal properly because … the amount of information being kept from us is deplorable,” said Darcy Dobson, whose mother Heather O’Brien was killed April 19 as she drove along a highway in Debert, N.S.

So far, Nova Scotia Premier Stephen McNeil has insisted Ottawa should take the lead and conduct a federal inquiry.

The premier has said the RCMP’s handling of the case should be examined at the federal level because the RCMP is a national police force. As well, he has said other federal entities deserve scrutiny, including the Canada Border Services Agency, given the fact that the killer had unlicensed firearms from the United States.

“In this time, nothing is off the table, and all tools should be considered,” Blair’s office said in a statement Monday. “We will do everything possible to ensure that we learn the lessons of this investigation, and make sure tragedies like this one never happen again.”

Last week, Nova Scotia Justice Minister Mark Furey, a former RCMP officer, confirmed the province has authority to conduct a public inquiry—but he, too, stressed that it makes more sense for Ottawa to do the job.

However, Furey’s tone seemed to shift Monday when he was asked about the possibility of a joint inquiry.

“The premier and I have been very clear that we are working with the federal government to identify the most effective mechanism to get these answers,” he said in an emailed statement.

“This is a matter of both federal and provincial responsibility, and the province is working with the federal government to take action and move this forward together. We believe this joint approach will yield the best results.”

Federal-provincial inquiries have been deployed to investigate some of Canada’s biggest tragedies.

In 1993, Justice Horace Krever started a four-year joint inquiry that investigated how thousands of Canadians received transfusions of blood and blood products infected with HIV and hepatitis C.

And in 1982, the Newfoundland and Labrador government set up a joint commission with Ottawa to look into one of Canada’s worst marine disasters: the sinking of the Ocean Ranger offshore drilling rig, which claimed 84 lives.

Ratushny, author of the 2009 book “The Conduct of Public Inquiries,” said governments are often reluctant to get involved in public inquiries because the political risks and costs can be high.

“When governments call a public inquiry and they have broad terms of reference, they leave themselves very exposed to criticism,” Ratushny said in a recent interview.

“When they give (authority) to an independent commissioner, they lose control over the process. And so they usually don’t like to do that until there is such a demand from the public that they have no choice.”

In their open letter, O’Brien’s family urged the federal and Nova Scotia governments to work together. “The back and forth about who’s responsible for an inquiry is unreal,” Dobson wrote, saying it only causes “more distress” for families.

The back and forth between the two levels of government is nothing new for Nova Scotia.

There were calls for an inquiry in January 2017 after a mentally ill former Canadian soldier killed his family and himself in their rural Nova Scotia home, but McNeil insisted it was Ottawa’s responsibility.

At the time, the federal government said the province should take the lead.

It would take almost a year of constant public pressure—much of it generated by relatives of the victims—before the province’s chief medical examiner recommended a provincial fatality inquiry. Public hearings started this past January—three years after Lionel Desmond killed his mother Brenda, wife Shanna and their 10-year-old daughter Aaliyah, before taking his own life.

“Governments in general, and this provincial government in particular, are reluctant to establish public inquiries,” said Archie Kaiser, one of the law professors at Dalhousie who has called for a public inquiry.

“One suspects that it is probably a matter of cost, reluctance to be exposed to public accountability and timorousness about the recommendations which might emerge. The net result is often to refuse to establish an inquiry or, in this case, to deflect responsibility.”

Meanwhile, some have argued the Mounties should be left to finish their investigation before any decision is made on an inquiry. However, there’s nothing stopping either level of government from announcing their intentions.

On May 9, 1992, an explosion inside the Westray mine in Plymouth, N.S., killed 26 miners and triggered immediate demands for some sort of investigation. Six days later, the Nova Scotia government-appointed Nova Scotia Supreme Court Justice Peter Richard to conduct a public inquiry.

Legal challenges and concerns the inquiry could impede a criminal investigation led to delays, and the inquiry did not begin public hearings until November 1995.