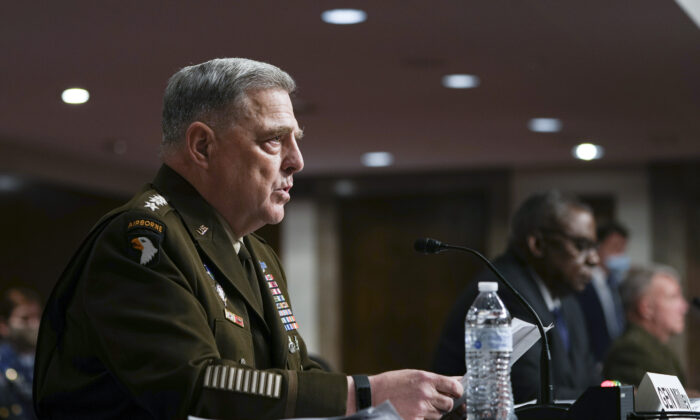 The U.S. withdrawal from Afghanistan and the evacuation of Americans, Afghans, and allies out of Kabul following the Taliban takeover last month was a “logistical success but strategic failure,” the Pentagon’s top military officer told Congress on Tuesday.

Joint Chiefs of Staff Chairman General Mark Milley made the remarks during a Senate hearing by members of the Senate Armed Services Committee, where he was questioned on the Afghanistan withdrawal alongside others including Defense Secretary Lloyd Austin and U.S. Central Command commander Marine Corps Gen. Frank McKenzie.

The hearing saw lawmakers both criticize the handling of the final days of the 20-year Afghanistan war and praise the decision to withdraw all remaining U.S. troops by President Joe Biden’s self-imposed Aug. 31 deadline. Some 124,000 people, including roughly 6,000 Americans, were evacuated from Kabul last month.

“It was a logistical success but a strategic failure,” said Milley, the nation’s top-ranking military officer.

“Outcomes in a war like this, an outcome that is a strategic failure—the enemy is in charge in Kabul; there’s no way else to describe that—that outcome is a cumulative effect of 20 years, not 20 days,” Milley added.

Questioned on what could have been done differently to prevent the collapse of the U.S.-backed government in Afghanistan and the subsequent Taliban takeover of Kabul on Aug. 15, Milley said he believed U.S. troops should have maintained a presence of thousands in the country.

Gen. Scott Miller, who commanded U.S. forces in Afghanistan, also said he believed U.S. troops should remain in the country.

McKenzie meanwhile said he raised concerns that a complete withdrawal “would lead inevitably to the collapse of Afghanistan military forces and eventually the Afghan government,” and that he was confident his recommendations were heard by the president.

Amid mounting criticism from both sides of the political aisle, Biden has defended his handling of the withdrawal, touting it as an “extraordinary success.” The president has said his decision to end the two-decade conflict was a choice between either pulling out or committing further forces for years to come.

Pressed on whether top military advisers recommended keeping 2,500 troops in Afghanistan, Biden told ABC News last month that “no one said that to me that I can recall.”

Sen. Tom Cotton (R-Ark.) on Tuesday said that he believes Milley’s advice was rejected by the president.

“It is clear—President Biden lied to the American people and ignored military advice,” Rep. Doug Lamborn (R-Colo.) added on Twitter.

Speaking to reporters on Tuesday, White House press secretary Jen Psaki said that the president “made clear” that advice from advisers “was split” and that Biden “didn’t outline what every individual conveyed to him.”

Questioned on why he didn’t resign in protest, Milley said that it would be “an incredible act of defiance for a commissioned officer to just resign because my advice is not taken.”

“This country doesn’t want generals figuring out what orders we’re going to accept and do. That’s not our job,” Milley said. “The president doesn’t have to agree with that advice. He doesn’t have to make those decisions just because we are generals.”

“It is obvious the war in Afghanistan did not end on the terms we wanted,” Milley told the hearing, noting that the Taliban terrorist group is “now in power in Kabul.”

“We must remember that the Taliban was and remains a terrorist organization and they still have not broken ties with al-Qaeda,” he added. “I have no illusions who we are dealing with. It remains to be seen whether or not the Taliban can consolidate power, or if the country will further fracture into civil war.”

Tuesday’s Senate hearing was the first of two scheduled on the U.S. withdrawal from Afghanistan. A second session is scheduled in the House on Wednesday.

According to Austin, some 100 Americans who wish to leave Afghanistan still remain in the country.