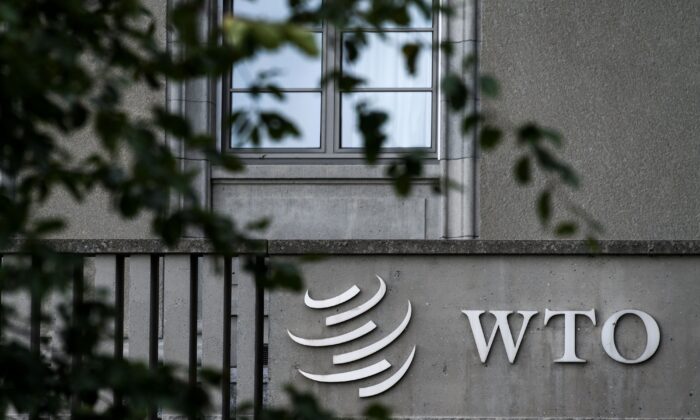 A sign of the World Trade Organization is seen on their headquarters in Geneva, Switzerland, on Sept. 21, 2018. (Fabrice Coffrini/AFP via Getty Images)
Thinking About China

Joining the WTO Gave the CCP 20 Years of Development, but Has the West Been Fooled?

The year 2021 marks the 20th since China became a member of the World Trade Organization (WTO). There have been a large number of publications either commemorating or reassessing the Chinese regime’s participation in the WTO.

The Chinese Communist Party’s (CCP’s) propaganda mouthpiece People’s Daily published an article on Dec. 11 boasting that the accession of China to the WTO is “a typical win-win situation for China and the rest of the world.”

However, Western publications look at the CCP’s WTO membership with a more realistic reassessment. For example, the BBC published a Chinese article in December claiming that the CCP’s entry to the WTO “has changed the rules of the game for the United States, Europe, and most Asian countries, and indeed for any country with resources of industrial value, such as oil and metals.”

Most of the Western reflections acknowledge that for the past 20 years, the West’s expectations of China have been dashed and that the CCP hasn’t lived up to the promises it made upon accession. China hasn’t moved toward democracy, and the West has failed to change China. On the contrary, China has changed the West.

Here’s a question that most Western scholars and media are reluctant to ask: Is it really the case that the good intentions of the West have been dashed?

The CCP’s policy-making process is hidden, but its policy implementation is mostly public. Hence, it’s up to the West to decide if it wants to see the true nature of the CCP.

Two major national incidents that occurred between the end of the Cultural Revolution and China’s accession to the WTO should have been more than enough for the West to see how evil the CCP is.

In the first incident, the CCP conducted a massive killing in China’s political center, murdering students who called for political change. In the latter incident, it launched a national political campaign to suppress religious belief. These two incidents proved that the CCP lied when it claimed that there would be no more political campaigns after the Cultural Revolution.

Perhaps one can say that when China was admitted by the WTO as a member in 2001, people began to forget about the Tiananmen Square massacre because it happened more than a decade before. But the persecution of Falun Gong began only two years before the CCP’s accession to the WTO. Protests against the CCP’s persecution are seen frequently outside of China, which shouldn’t have gone unnoticed.

Perhaps this is what the international consortia appreciate in the CCP, which has always done all it can to maintain its rule and stability, because only in this way can the interests of large consortia be protected.

It’s worth noting that not long after the June 4 massacre, before the blood of the students in Tiananmen Square dried, former U.S. President George H.W. Bush secretly sent his envoys to Beijing in late June and December, helping Beijing to get over the crisis.

Former CCP leader Deng Xiaoping knew the United States well. He also knew that to survive, the CCP had to develop its economy, which couldn’t rely only on the United States. For this reason, Deng didn’t hesitate to start the Sino–Vietnamese war in 1979, 12 days after he returned from his visit to the United States. It was no coincidence that the war broke out shortly after Deng’s visit and could be regarded as the CCP signaling to consolidate its ties with the United States.

If looked at from another angle, the CCP’s suppression of the 1989 students’ democratic protest could be taken as a similar signal of the CCP to the international consortia: China’s situation is under control, so your investment in China is secure.

Unfortunately, Deng’s judgment of the United States and other Western countries was correct.

By 1999, when Jiang Zemin, then the CCP’s top leader, decided to persecute Falun Gong, he no longer needed to consider the reaction of Western governments. Not only that, but he also took the initiative to challenge the West on universal values and rights. For example, at the APEC meeting in New Zealand that year, Jiang personally presented anti-Falun Gong propaganda to former U.S. President Bill Clinton.

Prison Products Accepted by the West

The following is an example showing how the CCP’s behavior after joining the WTO had obtained international support or tacit approval.

Take the example of products of labor camps or prisons in China. We all see that the United States and Europe are now sanctioning slave labor products in Xinjiang, China. But slave labor products existed much earlier than those of Xinjiang today, and many of them were for export.

In the first decade of the 2000s, hundreds of thousands of Falun Gong practitioners were imprisoned in China’s reeducation-through-labor system, also known as forced labor camps. Almost without exception, they were forced to make slave labor products.

The incident didn’t receive much attention—though it should have—from the countries that imported those products.

The news came to the attention of South China Morning Post reporter Jamil Anderlini, who personally visited Xuchang No. 3 Labor Camp in Henan Province in 2005 to investigate and confirm the truth of the revelations. After being threatened with arrest, he rushed back to Hong Kong overnight and published his investigation, “Banks Buy Into Jail-Labour Firm,” stating that six internationally renowned financial institutions were major shareholders of Henan Rebecca.

The report won the 2006 SOPA (Society of Publishers in Asia) Award.

In 2006, Aina Hunter, a reporter for the New York-based fashion magazine The Village Voice, was writing an in-depth investigation of wig fashion when Hunter noticed Anderlini’s article and pursued it further. Hunter discovered that a human rights group had filed a complaint with the U.S. Department of Homeland Security as early as 2004, requesting an investigation into Henan Rebecca’s imports. The complaint received no response.

According to Hunter’s report, Richard D’Amato, chairman of the U.S.–China Security Review Commission, “fired off a letter … to the commissioner of U.S. Customs and Border Protection when he learned of the allegations against Henan Rebecca.” He called the response that he received “perfunctory,” so he went on to express his concerns to Sens. Joe Lieberman (D-Conn.), Susan Collins (R-Maine), and Bill Frist (R-Tenn.). He hadn’t received a response by the time Hunter’s report was published.

An executive of a human rights group, who asked that her name not be used, said that “the U.S.–China commission is powerless,” and that under the administration at the time, “there is little use hoping for action on the part of the federal government,” Hunter wrote.

Such is the case in the United States, which is one of the few Western countries that explicitly bans the import of slave labor products. Of course, the CCP can’t be expected to voluntarily abide by WTO rules and honor its commitments. After all, the CCP hasn’t broken the rules in a day, but step by step.

So far, most of the Western reflection has failed to see that the CCP’s persecution of religious beliefs and human rights violations have gone hand in hand with its economic development and WTO membership and were the real basis for the CCP’s violation and even change of international rules. Only by recognizing this can the West prevent the same mistakes from being made.

This wasn’t the first time the United States had been led by the nose by the CCP.

During World War II, Joseph Warren Stilwell served as chief of staff for the leader of the Republic of China, Chiang Kai-shek. U.S. Gen. George C. Marshall came to China to mediate in the civil war after World War II had ended. They both had unrealistic expectations about the CCP, and a ceasefire agreement between China’s then-ruling Nationalist Party and the CCP became a powerful weapon for the latter to delay and strengthen itself for an all-out civil war. The CCP used Marshall as a tool for this purpose.

In the end, the CCP won time and the civil war with the support of the Soviet Union, while the Nationalist government lost the full support of the U.S. government. The United States wasn’t able to gain any benefits from the CCP, but became the target of the anti-American movement when the CCP set up the “Shen Chong Incident.”

Shen Chong was a student at the prestigious Peking University, and she was believed to be a CCP member. She was allegedly raped by two U.S. Marines stationed in China on Christmas Eve in 1946. The CCP incited nationwide student protests following the incident, demanding the withdrawal of U.S. troops from China.

Gordon G. Chang, a distinguished senior fellow at the Gatestone Institute, wrote in “The Coming Collapse of China” in 2001 that the CCP would collapse in 2011. People later questioned that the rise of China happened exactly during the period of the predicted collapse and thought Chang was wrong.

In fact, if we look at it from another angle, we can come to a different conclusion.

The book is right in describing all the ills of the CCP’s system, which are inherent, and which the CCP hasn’t been able to overcome. But one thing Chang didn’t foresee was that, at the time of the book, the CCP joined the WTO and became part of globalization, which was the most important and beneficial part of it. That is to say, the international consortia and multinational corporations have invested in China, which not only saved the CCP from defeat, but also helped it rise to pose the greatest threat to the existing international order. U.S. establishment scholars are far more mistaken in their understanding of the CCP.

Some people think that the 20 years of the CCP’s accession to the WTO have proved that totalitarian systems and free economies are compatible. But the facts have proved just the opposite.

The international situation has changed in recent years precisely because Western countries have begun to recognize this incompatibility, which has caused irreparable damage to the free global economy. There’s no such thing as “a win-win situation,” as described by the CCP’s propaganda.

Looking back at the history of the CCP, it hasn’t shared any benefits with anyone. If the CCP is able to take over others, then it will take over others. But when it isn’t powerful enough to take over, it keeps a low profile, hides its true intentions, and waits for its chance to take over. This was the case in the civil war between the CCP and the Nationalist Party and in its confrontation with the Soviet Union, and it’s still the case in joining the globalization of the WTO.