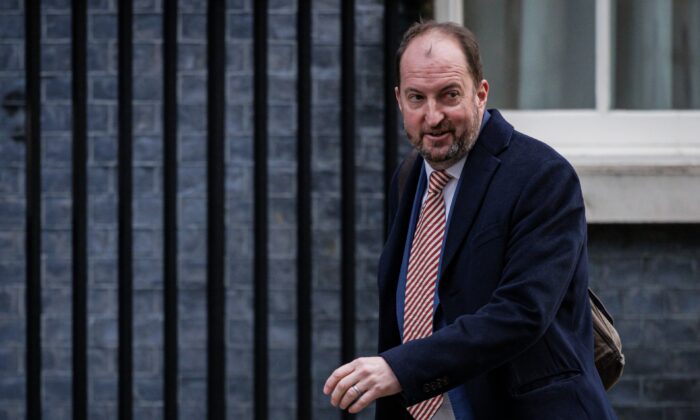 On Feb. 5, following a string of resignations of his senior staff in Number 10 Downing Street, Johnson named Guto Harri, a former BBC journalist who served as his spokesman and chief of staff during his first term as London mayor, as his new director of communications.

The Sun reported on Feb. 6 that Harri, who had been working for lobbying firm Hawthorn Advisors, was “directly involved” in talks with senior officials in 2020 trying to persuade the government not to ban Huawei from Britain’s 5G networks.

Johnson initially favoured a limited role for Huawei, but eventually decided to strip Huawei equipment from Britain’s 5G networks by 2027, due to pressure from the United States and his own backbench Conservative members of Parliament.

Responding to the revelation by The Sun, the prime minister’s official spokesman said on Feb. 7 that Harri “provided advice to the clients of a private company” and it was “entirely legitimate.”

“It’s in the public domain and obviously we would not exclude from government someone with valuable experience and expertise,” he said.

Later, the newspaper published more details of Harri’s involvement in the Huawei affair.

On June 2, 2020, Harri had a 25-minute video call with Sir Eddie Lister, then chief of staff of Number 10, alongside three top Huawei executives, the paper said.

According to minutes of the meeting, obtained by The Sun, Lister said: “This PM is not anti-China and is not Donald Trump.”

But he said: “We are caught. We want the technology, we want it rolled out. There’s an American concern and a parliamentary concern. There are a large number of MPs across the political divide who have a problem with China. Some are Atlanticists, some over COVID, some over Hong Kong, some over human rights.”

The minutes show Harri directly asking Lister if there were “any ministers we should talk to.”

“Perhaps give a nudge in DCMS (Department for Digital, Culture, Media, and Sport) or Treasury?” he asked.

The revelations raised concerns among UK lawmakers over Harri’s appointment.

The main opposition Labour Party warned of “potential national security issues” arising from “the revolving door from lobbying to government.”

Sir Iain Duncan Smith, a former Conservative Party leader, called for Harri to be subjected to “full security oversight including past involvements with Huawei.”

After the Sun reported the leaked minutes, a Number 10 spokeswoman said: “In full compliance with appropriate guidance, government officials met with a number of interested parties, including Huawei, following the change in U.S. policy.

“After a technical review by the National Cyber Security Centre in response to the U.S. sanctions, the government then banned the purchase of any new 5G Huawei equipment and is in the process of removing all Huawei equipment from 5G networks.

“The prime minister always acts in the best interests of the UK when dealing with China which allows us to manage disagreements, defend our values, and preserve space to tackle challenges including on security.”