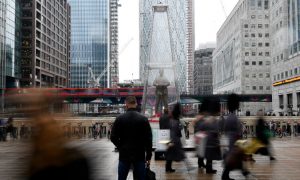 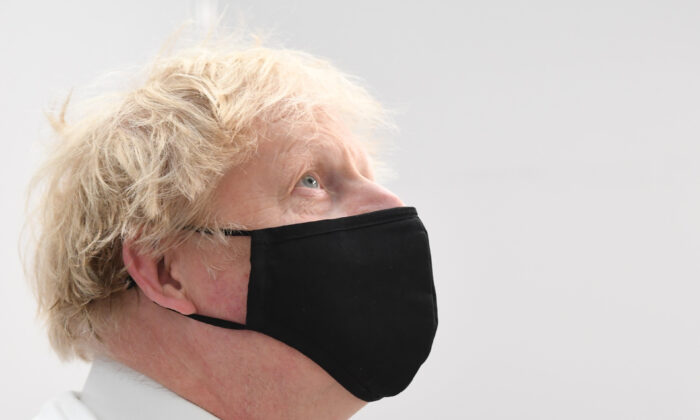 Boris Johnson wears a mask while visiting a vaccination centre at the Business Design Centre in Islington, London, on May 18, 2021. (Jeremy Selwyn - WPA Pool/Getty Images)
UK

Prime Minister Boris Johnson has said that there’s “nothing conclusive” at the moment that suggests England needs to delay its reopening.

The prime minister said the government will be “letting people know in a few days’ time.”

According to Johnson’s road map to exit the third national CCP (Chinese Communist Party) virus lockdown in England, all legal restrictions will be removed from June 21, if all goes well.

But the prospect of freedom is overshadowed by concerns over the Indian variant of the CCP virus, which some experts say may be 50 percent more transmissible than the UK variant.

The prime minister has previously warned the rise in cases of the Indian variant could risk the road map being delayed.

If outbreaks are limited, ministers could opt instead to push ahead with the reopening while keeping some areas under restrictions in an echo of the controversial tiered system introduced in 2020.

Asked on Tuesday whether the date will be affected, Johnson told reporters the government is keeping everything under “very, very careful, close review.”

“We’re looking at all the data as it comes in from places like Bolton, Blackburn, Bedford, Sefton, and other places,” Johnson said, referring to areas where the Indian variant is reportedly becoming dominant.

“And I’m afraid we just got a few more days of looking at that data,” he added.

“But as things stand, at the moment I can see nothing conclusive in the data to say that we have to deviate from the present road map, but we’ve got to be cautious and we’ll be letting people know in a few days’ time.”

Health Secretary Matt Hancock has said that the final decision on whether or not to remove all legal restrictions as scheduled will be made on June 14.

The government has ramped up the promotion of its vaccination programme after Hancock on Sunday said early lab data indicated that the CCP virus vaccines do work against the Indian variant.

Johnson said the uptake of CCP vaccines in the UK has been “incredibly high.” He thanked people who have taken the jabs and urged people to take them when they are offered.