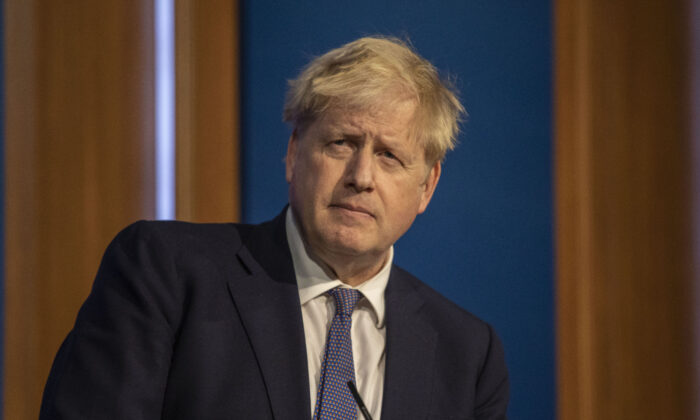 With 313 deaths reported on Saturday, the cumulative number of deaths within 28 days of a positive CCP (Chinese Communist Party) virus test has reached 150,057, making the UK the seventh country to officially report passing the milestone, following the United States, Brazil, India, Russia, Mexico, and Peru, while the authenticity of the official death toll in China—where the CCP virus originated—has been questioned.

Separate figures from the Office for National Statistics (ONS) show there have been 173,248 deaths registered in the UK where COVID-19 was mentioned on the death certificate. Not all of the deaths were due to COVID-19.

According to the latest ONS figure, 146,359 deaths have been registered in England with COVID-19 mentioned on the death certificate by November 2021. Almost 89 percent (130,061) of them had COVID-19 registered as an underlying cause of death.

Posting on Twitter, Johnson said the CCP virus had “taken a terrible toll” on the UK.

“Each and every one of those is a profound loss to the families, friends, and communities affected and my thoughts and condolences are with them,” the prime minister wrote.

Johnson urged people to get vaccinated, saying it’s the country’s “way out of this pandemic.”

The UK has experienced unprecedented numbers of new CCP virus infections in the past month, with the daily number peaking at four times the previous record, despite the high vaccination rate in the country, but the number of hospitalisations and deaths are much lower than the numbers in previous waves.

The number of new hospitalisations has surged since mid-December, but the increase appears to have slowed after Christmas. On Jan. 3, 2,434 new admissions in the UK had COVID-19.

Health officials have said a higher percentage of the new admissions have been incidental COVID, and the average length of stay in hospital appears to have shortened.

On Thursday, 18,454 patients in hospitals across the UK had COVID-19, 47 percent of the peak number on Jan. 18, 2021. According to data from NHS England, on Jan. 4, more than a third of COVID-19 patients in England’s acute NHS trusts were primarily treated for other reasons.