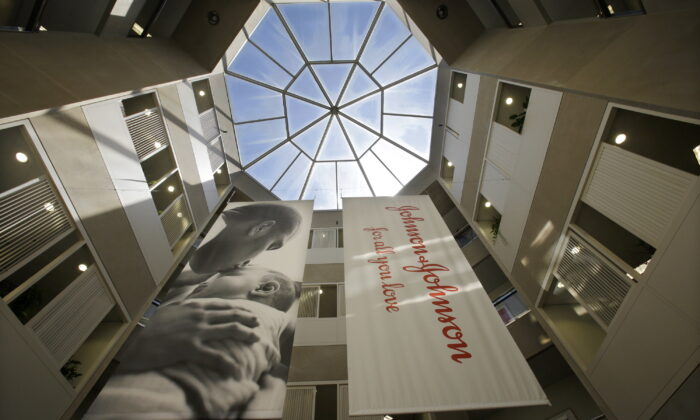 Large banners hang in an atrium at the headquarters of Johnson & Johnson in New Brunswick, N.J., on July 30, 2013. (Mel Evans/AP Photo)
Companies

SAN DIEGO—A California appeals court has upheld a lower court ruling that Johnson & Johnson must pay penalties to the state for deceptively marketing pelvic mesh implants for women, but reduced the amount by $42 million to $302 million.

Sturgeon found after a non-jury trial that the company made misleading and potentially harmful statements in hundreds of thousands of advertisements and instructional brochures for nearly two decades.

California’s Fourth District Court of Appeal issued a ruling Monday that $42 million in penalties assessed for the company’s sales pitches to doctors were unjustified because there was no evidence of what the sales representatives actually said.

But the appeals court said Sturgeon received ample evidence that Ethicon knowingly deceived both physicians and patients about the risks posed by its products, the San Francisco Chronicle reported.

Ryan Carbain, a Johnson & Johnson spokesperson, told the Chronicle that the company would appeal the appeals court ruling to the state Supreme Court.

The instructions for use in all of the company’s pelvic mesh implant packages “falsified or omitted the full range, severity, duration, and cause of complications associated with Ethicon’s pelvic mesh products, as well as the potential irreversibility and catastrophic consequences,” Presiding Justice Judith McConnell of the appeals court said in a 3-0 ruling upholding the $302 million in penalties.

She rejected the company’s claim that the fine was excessive, saying it amounted to less than 1 percent of Johnson & Johnson’s net worth of $70.4 billion.

The products, also called transvaginal mesh, are synthetic and surgically implanted through the vagina of women whose pelvic organs have sagged or who suffered from stress urinary incontinence when they cough, sneeze or lift heavy objects.

Many women have sued the New Jersey-based company alleging that the mesh caused severe pain, bleeding, infections, discomfort during intercourse and the need for removal surgery.

The condition is estimated to affect 3 percent to 17 percent of women and it sometimes becomes severe after age 70.

Johnson & Johnson, the world’s biggest maker of health care products, is contesting other lawsuits over drug side effects, its role in the U.S. opioid epidemic and allegations its baby powder caused cancer in some users.