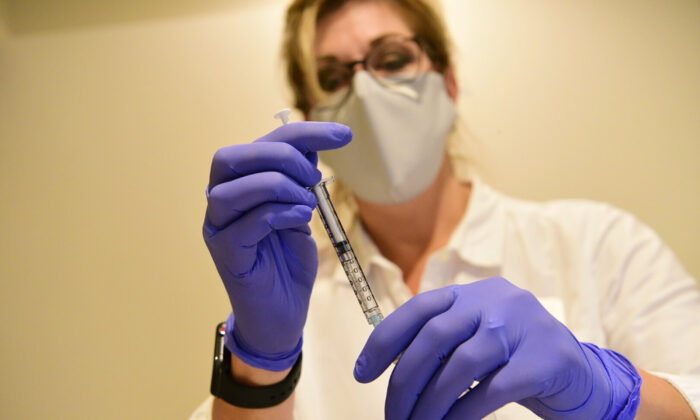 A pharmacist prepares to give a COVID-19 vaccine in a file photo. (Johnson & Johnson via AP)
By Jack Phillips

According to a graph published by the agency, during the week of April 5, about 4.95 million doses of the J&J vaccine are available, but next week the supply will plummet to 700,000. The J&J COVID-19 vaccine is a single-shot dose.

In March, there was an error in manufacturing the vaccine at a plant in Baltimore, Maryland, which reportedly ruined 15 million doses. The incident prompted J&J to take over vaccine production at the plant, which has been operated by UK-based pharmaceutical giant AstraZeneca.

A spokesperson for J&J, in a statement in response to a question about the CDC data, told The Epoch Times that it “expects to deliver nearly 100 million single-shot doses of its COVID-19 vaccine to the U.S. Government by the end of May.” The company did not elaborate on the dropoff next week.

News of next week’s vaccine dropoff drew a comment from Ohio Gov. Mike DeWine, who said it did not have anything to do with any factory error.

“The amount that we’re receiving next week, which is down very considerably, is not, I’m told, impacted by what happened in that factory,” DeWine said. “So we’ve got a couple weeks of a lot less Johnson & Johnson.”

Officials said that the decline in supply will put a damper on states’ vaccination efforts.

“It definitely is way lower than what we were expecting,” said Dr. Danny Avula, Virginia’s state vaccine coordinator, according to the Wall Street Journal. “It’s just going to take longer for those who want a vaccine to be able to get vaccinated.”

New Jersey Gov. Phil Murphy said during a Thursday news conference that the decline in vaccines suggests there “are available appointments now that are probably not going to be available next week,” adding: “Jump at them if you can.”

“We have pretty clear visibility that the Johnson & Johnson supply that went up so dramatically this week is going to be down for at least the next couple of weeks,” Murphy added, cautioning: “I want to remind everybody you’re not going to get your vaccine on April 19.”

The vast majority of the shots available in the United States are produced by Modera and Pfizer. Approximately 90 million Pfizer doses and 80 million Moderna doses have been administered so far, according to CDC data. That’s compared with about 5 million doses of the J&J vaccine, although Moderna and Pfizer use two shots instead of J&J’s single shot.

This week, meanwhile, two vaccination sites in North Carolina and in Colorado were shut down after several people developed adverse reactions afterward, said officials. Both sites were reportedly using the J&J vaccine.