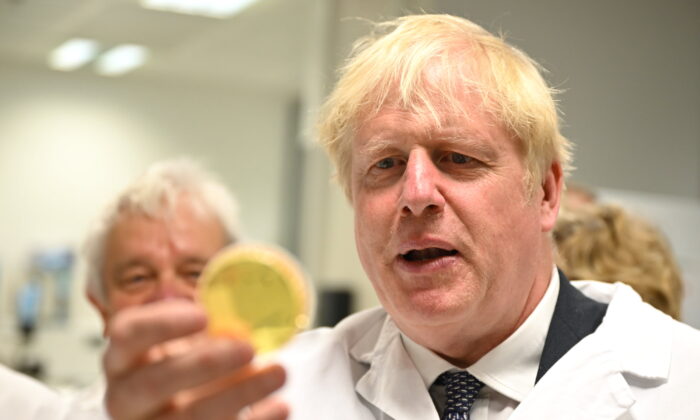 Prime Minister Boris Johnson looks at samples in a laboratory during a visit to the national flagship for biomedical research, the Francis Crick Institute, in central London, on July 11, 2022. (Leon Neal/PA Media)
UK

Britain’s outgoing Prime Minister Boris Johnson on Monday refused to comment on candidates vying to succeed him and suggested his support may be damaging.

Johnson was forced to resign on July 7 following a series of political blunders that culminated in the mass resignation of his Cabinet, including senior ministers who are now competing to replace him.

Announcing his resignation, Johnson blamed the “herd” mentality in Westminster for forcing him out and said the “brilliant and Darwinian system” will produce an “equally committed” leader.

During this first public appearance after his resignation on Monday, Johnson was asked whether he felt betrayed.

The prime minister told reporters at London’s Francis Crick Institute that he doesn’t want to “say any more about all that.”

“There’s a contest underway … I wouldn’t want to damage anybody’s chances by offering my support. I just have to get on,” Johnson said, adding that he will continue to discharge his duty in the meantime.

“Science [and] technology,” he said. “Our natural genius in this area is one of the many, many things that is going to carry us forward and make sure that our future is very bright.”

Johnson said he believes that “whatever happens and whoever takes over, there is a great, great agenda to be continued and that we put in some pretty fantastic investments, not just in science but in infrastructure, in skills, and in technology, that I think are going to enable us Conservatives, I should say, to keep on with our programme of levelling up and delivering for all the people in this country.”

The process to replace Johnson continues apace, with 11 candidates currently in contention.

The 1922 Committee of backbench MPs, which oversees the parliamentary process of the race, is due to announce a timetable later on Monday.

The committee is expected to whittle down the number of candidates to two by July 21—when Parliament begins summer recess—before 200,000 Conservative Party members choose a winner by postal ballot.

Most candidates have promised to cut taxes on individuals and businesses to alleviate the cost-of-living crisis and stimulate growth, while former Chancellor Rishi Sunak, who resigned on July 5 citing fundamental differences with Johnson on economic policies, suggested it would be “tell[ing] ourselves comforting fairytales” to promise tax cuts following the enormous government spending during the COVID-19 pandemic.