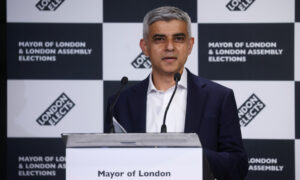 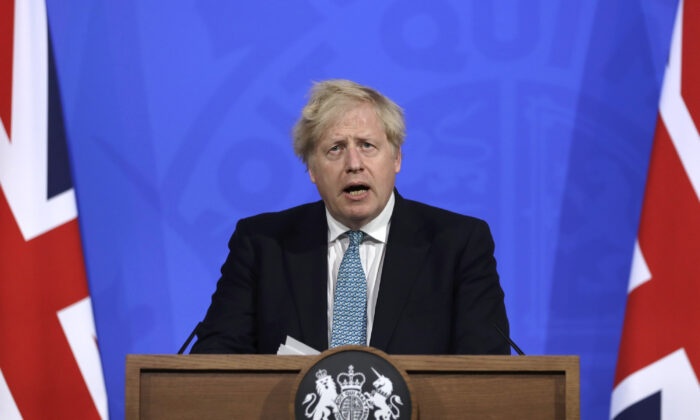 London police have arrested four men after a video circulated online showed anti-Semitic abuses were shouted in a street.

The Metropolitan Police said they were arrested on suspicion of racially aggravated public order offences and were taken into custody at a west London police station where they would remain.

The incident occurred as the conflict between Israel and Islamic terrorist group Hamas continued into its eighth day.

The Met traced one of the cars after receiving reports of the incident. A police helicopter was deployed and officers stopped the car at around 6:30 p.m.

Superintendent Jo Edwards, who was in charge of the policing operation, said the men’s behaviour was “utterly shocking and will not be tolerated.”

“I understand that this would have caused considerable concern within the community and we have arranged extra patrols in the St John’s Wood and Golders Green areas this evening,” he said in a statement.

Edwards said another protest in the afternoon “passed peacefully and concluded without any arrests.”

Earlier in the day, Housing Minister Robert Jenrick reacted to the video on Twitter, saying their behaviour was “vile.”

“This, on the streets of London is deeply disturbing. Vile, criminal hatred like this must not be tolerated,” Jenrick wrote.

In a separate tweet on Sunday morning, Jenrick said such racist rhetoric “must stop, and be addressed if not.”

“Whatever your view of the conflict in Israel and Gaza, there’s no justification for inciting anti-Jewish or Muslim hatred,” Jenrick wrote.

“There is no place for antisemitism in our society. Ahead of Shavuot, I stand with Britain’s Jews who should not have to endure the type of shameful racism we have seen today.” Prime Minister wrote on Twitter on Sunday afternoon.

“Utterly disgusting. Antisemitism, misogyny, and hate have no place on our streets or in our society. There must be consequences,” Starmer wrote on Twitter.

London Mayor Sadiq Khan thanked the Met for their “swift action” after the four mean were arrested.

“Grateful to our hardworking Met Police officers for their swift action in response to this appalling incident today,” the Muslim Mayor said on Twitter.

“Here in London we have a zero-tolerance approach to hate crime. If you commit a hate crime, you will face arrest,” he added.

On Saturday, nine police officers were injured amid efforts to disperse crowds outside the Israeli Embassy in London.

Nine people were arrested on suspicion of violent disorder in London, the Met said.

A further four were arrested on suspicion of breaching health regulations, the force added.

The Met said small pockets of disorder had followed a largely peaceful demonstration.

Demonstrators chanted “free, free Palestine,” and held banners calling for an end to the bombing of Hamas targets in Gaza by Israeli forces.

Former Labour leader Jeremy Corbyn appeared alongside the Palestinian ambassador to the UK at a rally in support of the Palestinians, as the conflict with Israel continues.

Corbyn was suspended from The Labour Party in October last year Thursday for seeking to deflect blame away from himself after a report found antisemitism in the party while he was the leader.

He was reinstated a few weeks later, but kept out of the Parliamentary Labour Party, meaning he has to vote in Parliament as an independent MP.

U.S. President Joe Biden on Saturday spoke with Israeli Prime Minister Benjamin Netanyahu to reiterate his strong support for Israel’s right to defend itself against missile attacks from Hamas, for whom Iran has voiced support, and other terrorist groups.

Hamas, Islamic Jihad, and other terrorist groups have fired around 2,300 rockets from Gaza into Israel since Monday, according to the Israeli Defense Forces (IDF), which said about 1,000 rockets were intercepted by its missile defences and 380 were misfired, adding to the death and injury of civilians in Gaza.

Israel has launched more than 1,000 precision air and artillery strikes aimed at Hamas and other terrorist targets that are often built close to civilian landmarks in the densely populated coastal strip.

The exchange of fire has killed at least 149 people killed in Gaza, including 41 children, and 10 people in Israel, including two children.

Janita Kan and PA contributed to this report.