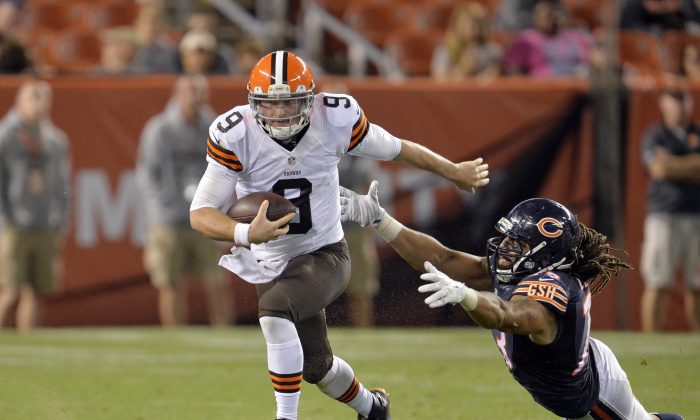 FILE - In this Aug. 28, 2014, file photo, Cleveland Browns quarterback Connor Shaw (9) runs away from Chicago Bears defensive end Austen Lane in the fourth quarter of a preseason NFL football game in Cleveland. With both Brian Hoyer and Johnny Manziel out with injuries, the rookie quarterback is expected to make his first NFL start Sunday against a Baltimore Ravens team fighting for a playoff spot. (AP Photo/David Richard, File)
NFL

Johnny Manziel Just Got Out of Rehab

Johnny Manziel, the oft-criticized Cleveland Browns quarterback, is now out of rehab.

A report from ESPN said Manziel, 22, is out. He entered the facility for alcohol dependency.

An expert said that rehab will probably do him some good.

“Whether they’re athletes or not, you always worry about sending people back into the same chaotic atmosphere that got them here,” added Grimes.