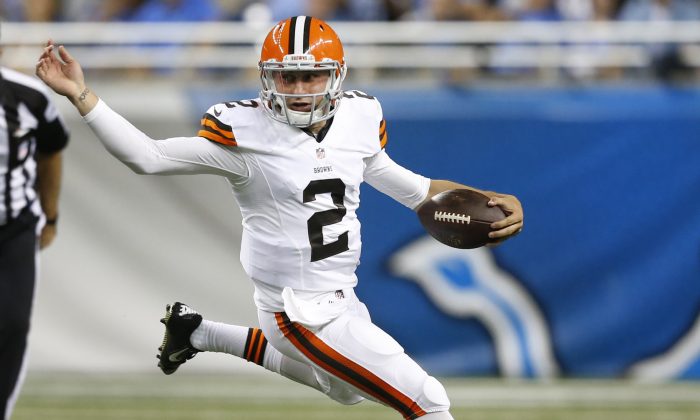 The Onion lampooned Johnny Manziel’s preseason debut by publishing an article saying he was victimized by “hazing.”

The satirical article says he was “forced to wear a Cleveland Browns jersey as part of a particularly cruel form of rookie hazing,” which is a slight against the recently woeful state of the Browns franchise.

The Browns haven’t been to the playoffs since 2002 after going 9-7, losing to the Pittsburgh steelers in the WildCard round. Tim Couch was the quarterback at the time.

The Onion quips further that Manziel “was made to wear the utterly demeaning outfit for several consecutive hours in full view of teammates, media members, and spectators” during his first game as a pro.

On social media websites, a number of users were confused by the Onion article, apparently believing it’s a real news website.

Here’s the disclaimer: “The Onion is a satirical weekly publication published 52 times a year on Thursdays.” It adds: “The Onion uses invented names in all its stories, except in cases where public figures are being satirized. Any other use of real names is accidental and coincidental.”

About Manziel’s first action, coach Mike Pettine told AP that he plans to name his starting quarterback after the Aug. 18 game.

“I wouldn’t say it’s 1,000 percent etched in stone, but I would like it decided before the third preseason game,” Pettine told the news agency. “If we have a starter that gets a lot of time in that game, then has all the practice time after that, we feel like he’ll be ready to go for the opener (Sept. 7 in Pittsburgh).”