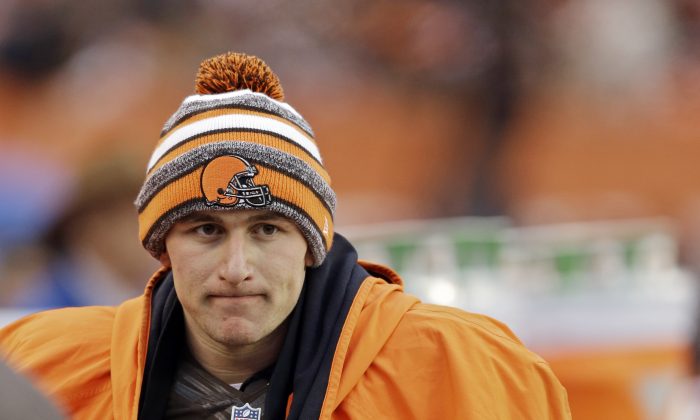 Cleveland Browns quarterback Johnny Manziel watches from the sidelines in the fourth quarter of an NFL football game against the Cincinnati Bengals Sunday, Dec. 14, 2014, in Cleveland. (AP Photo/Tony Dejak)
NFL

Johnny Manziel Could Be Inactive for Browns on Monday Night

BEREA, Ohio — Johnny Manziel’s demotion might include him not dressing for the game.

Browns coach Mike Pettine said Friday that he hasn’t decided if Manziel, who was stripped of his starting job this week, will be active for Monday night’s matchup against Baltimore.

Manziel was downgraded from starter to third string when a video surfaced of him partying during Cleveland’s bye week in an Austin, Texas, club. Josh McCown will start when the Browns (2-8) host the Ravens (3-7) with Austin Davis serving as the backup. Manziel is next on the depth chart and that could mean he doesn’t get to put on his uniform.

“I haven’t done the worksheet yet, but that always comes down to projected health, where we are at other positions,” Pettine said. “So I haven’t made that decision yet.”

Manziel’s swift downfall came shortly after he was elevated to starter for the remainder of this season. But after promising Pettine and other coaches he would behave during the time off, Manziel, who spent 10 weeks in a rehab facility during the offseason, couldn’t resist going out on the town.

Pettine refused to divulge any more details for his decision to bench Manziel, but he did not deny that part of the punishment was due to the 22-year-old not being honest with him.

“I already addressed it,” Pettine said. “I said trust and accountability was where we had a shortfall. I have nothing more to add.”

Manziel made a brief appearance in Cleveland’s locker room following practice, but was not available for an interview. He has not spoken to reporters since his demotion.

Browns offensive coordinator John DeFilippo said he supports Pettine’s decision to penalize Manziel. He understands the reason, but that doesn’t ease the sting.

“It’s disappointing,” he said. “I’m not going to lie. You have a player that I think we would all agree has come so far from a football standpoint from the product he put on the field from a year ago.”

DeFilippo has been supportive of Manziel all season, and he’s not going to bail on him now.

“All of us as people, myself included, we all are a work-in-progress every day,” he said. “Some of us are dealing with some different issues than others. We know Johnny’s issues and we are working with him every day. There is no doubt in my mind that Johnny is going to bounce back.”

Like Pettine, DeFilippo sidestepped questions about his conversations with Manziel. He still believes the 22-year-old, who went 1-2 as a starter this season, can develop into a franchise QB.

“I like what I’ve seen. I really do,” he said. “Even the jump that he made from the Cincinnati game to the Pittsburgh game was a huge jump. I think Johnny’s played enough football where we know what we have in him and as we all know a six-game season in the NFL is a long stretch — a very long stretch.”

“We’re a long way from the end of the season, so you don’t close doors on anything. You never say never in this profession. So to say Johnny Manziel won’t play again this season, I’m not ready to say that,” he said.

NOTES: Pettine said CB Joe Haden, who will miss his fifth game this season with a concussion, has been unable to pass a memory test to get back to his preseason baseline score. … WRs Taylor Gabriel and Andrew Hawkins will also miss Monday’s game with concussions. … LG Joel Bitonio returned to practice after injuring his ankle on Nov. 5 at Cincinnati and sitting out against Pittsburgh the following week. He’s hoping to be healthy enough to face the Ravens.