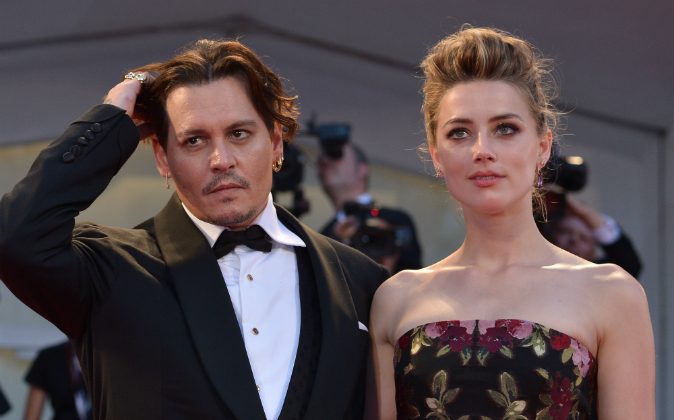 US actress Amber Heard arrives with her husband US actor Johnny Depp for the screening of the movie 'The Danish Girl' presented in competition at the 72nd Venice International Film Festival on September 5, 2015 at Venice Lido. (TIZIANA FABI/AFP/Getty Images)
Entertainment

Johnny Depp’s personal assistant, Stephen Deuters, is claiming the text message exchange between himself and Amber Heard are suspicious, according to TMZ.

“The texts that were posted in which he allegedly apologized to Amber Heard for Johnny’s violent behavior are heavily doctored … and he never said Johnny attacked her,” Deuters told TMZ on June 2.

He went on to say,”He knows of no acts of abuse toward Amber at the hands of Johnny and has never made such a claim to anyone. Johnny has never been violent toward anyone he knows.”

Amber Heard has made allegations against the 52-year-old actor, claiming she suffered physical abuse on numerous occasions throughout the tenure of their relationship. Photos and text messages have corroborated the alleged abuse.

In a text exchange between Deuters and Heard, Deuters appeared to apologize for the actions of Depp.

“Think he’s just texted you. He’s incredibly apologetic and knows that he has done wrong,” Stephen’s alleged text read. “He wants to get better now. He’s been very explicit about that this morning. Feel like we’re at a critical juncture.”

Heard’s alleged response included uncertainty in wanting to remain in a relationship with the “Pirates of the Caribbean” actor.

“Obviously he has no idea what he did or the extent that he did it. If someone was truly honest with him about how bad it really was, he’d be appalled,” she wrote.

Deuters allegedly wrote, “He was appalled. When I told him he kicked you, he cried. It was disgusting. And he knows it.”

He added, “He’s a little lost boy. And needs all the help he can get.” Stephen allegedly continued, “He is so very sorry, as he should be.”

The personal assistant called the released text messages “suspicious” because no dates were present. To prove it, Deuters is willing to testify under oath that a conversation between Heard and himself about alleged abuse never took place.

Depp and Heard are currently proceeding with a divorce after nearly 16 months of marriage.