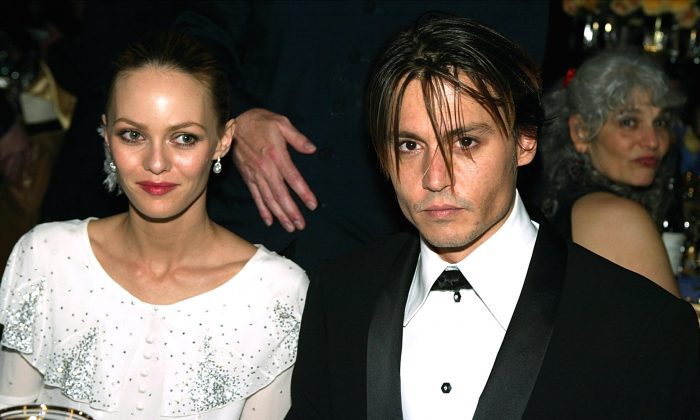 Actor Johnny Depp (R) and his wife Vanessa Paradis pose at the The Governors Ball after the 76th Annual Academy Awards at the Renaissance Hollywood Hotel on February 29, 2004 in Hollywood, California. (Kevin Winter/Getty Images)
Entertainment

Vanessa Paradis, who dated Johnny Depp for 14 years and has two children with him, came out in defense of the actor, calling the allegations of domestic violence “outrageous.”

“In all the years I have known Johnny, he has never been physically abusive with me and this looks nothing like the man I lived with for 14 wonderful years,” Paradis wrote, in a letter published by TMZ.

Johnny Depp Performs With Band After Allegations of Abuse

Paradise called Depp “sensitive” and “loving” in the letter. Their children, Lily-Rose and John Christopher Depp, are 17 and 14.

Depp’s wife of 15 months, Amber Heard, has recently filed for divorce, accusing the actor of beating her, and Heard showed up to court with visible bruises near her right eye.

Heard has asked for $50,000 per month in spousal support, as well as access to their downtown LA home.

Representatives for Depp denied the allegations, and said that Heard is faking abuse to obtain an advantageous financial agreement in the divorce, where potentially hundreds of millions of Depp’s assets are at stake.

“Amber is a successful model and actress who earns her own income and is capable of supporting herself,” said Depp’s attorney Laura Wasser, according to People Magazine.

Paradis adds to the testimony of Depp’s first wife Lori Anne Allison, who called him a “soft person” who would never get angry.

Johnny “never got physical with her during their relationship … he never even screamed,” Lori said, according to TMZ.