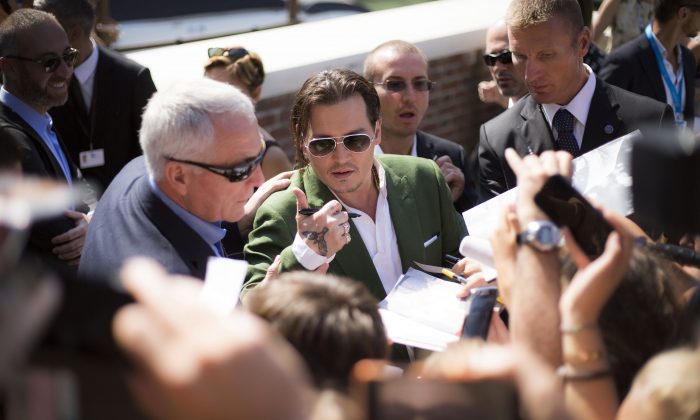 Johnny Depp signs autographs for fans as he departs after the photo call for the film Black Mass during the 72nd edition of the Venice Film Festival in Venice, Italy, Friday, Sept. 4, 2015. (Photo by Joel Ryan/Invision/AP)
Entertainment

VENICE, Italy — It’s Johnny Depp’s day at the Venice Film Festival. Judging by the acclaim greeting his performance in gangster drama “Black Mass,” it may turn out to be Johnny Depp’s year.

A pallid, blond and balding Depp is virtually unrecognizable as real-life Boston mobster James “Whitey” Bulger, who built up a criminal empire while acting as a longtime FBI informant — or “professional criminal consultant,” as one character puts it.

Depp’s Bulger is charismatic, scarily calm and utterly ruthless. It’s a remarkable transformation that could net him an Oscar nomination. But the actor says he has ready access to his dark side.

“I found the evil in myself a long time ago, and I’ve accepted it,” Depp told reporters in Venice Friday. “We’re old friends.”

Some are calling “Black Mass” Depp’s comeback film — though that would be news to the hundreds of Depp fans who camped out beside Venice’s Palace of Cinema Friday, hours before the movie’s red-carpet world premiere.

The Hollywood Reporter hailed Depp’s Bulger as one of his best performances, calling him “charismatic … fully convincing and frightening.” Variety said the “mesmerizing” turn was “a bracing return to form” after several under-performing films and years of “Pirates of the Caribbean” antics.

“Unlike most actors, Johnny takes a risk with every part he plays and I think he’s very artistically courageous,” Cooper told The Associated Press. “Clearly, he’s a national treasure.”

Cooper said he was fascinated by the “intersection of politics and crime” in Boston during the 1970s and 80s. Bulger’s brother Billy — played by Benedict Cumberbatch essaying a Boston accent — was a powerful state senator. His FBI contact was John Connolly (an intense Joel Edgerton), another tough South Boston kid torn between childhood loyalty and his duty as a lawman.

Cooper tells the tale of power and betrayal without melodrama in a lean and at times bone-crunchingly violent film.

“I didn’t want to have many stylistic flourishes, because then you know you’re just watching a film and I wanted this to feel like surveillance,” said Cooper, who also made the country-music drama “Crazy Heart.”

Bulger disappeared in 1995 and spent 16 years as one of the nation’s most-wanted fugitives before he was captured in California in 2011. Now 86, he is serving life in prison.

Depp asked to meet him, a request he says Bulger “respectfully declined.” But the actor was gratified when Bulger’s attorney, J.W. Carney Jr., visited the set and “said he could feel his old friend in what I was doing.”

“With a character like James Bulger, I think you have to approach him just as a human being,” Depp said. “Nobody wakes up in the morning and shaves or brushes their teeth and looks in the mirror and thinks, ‘I’m evil.’

“He was complicated. … He would take in little old ladies’ groceries into the house, and then 10 minutes later he might be bashing someone’s skull in.”

Depp’s role in the film, which opens in the U.S. Sept. 18, will draw comparisons to Marlon Brando’s transformation into Don Corleone in “The Godfather.” Depp likely won’t mind. He said his heroes have always been chameleon-like actors — “John Barrymore and Lon Chaney Sr., and certainly Marlon Brando.”

“I’ve always wanted to try to be a character actor, more than the poster boy that they tried to make me, about 100 years ago,” said the 52-year-old former teen heart-throb.

“I find great safety but at the same time danger in trying to do these transformations. … I think that’s important also as an actor, to test yourself, challenge yourself each time. Take the chance that you may actually fall flat on your face and look like a complete ass.”