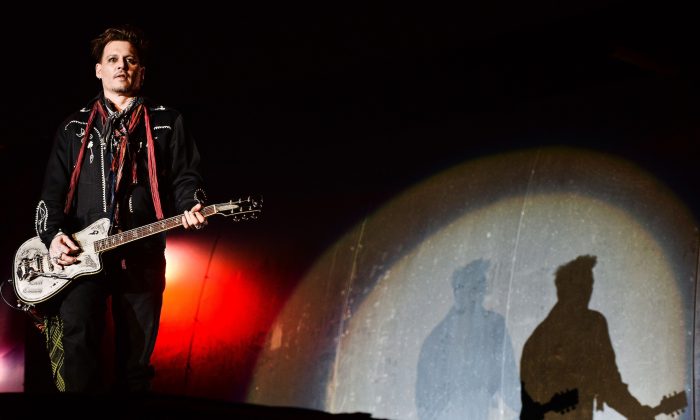 Johnny Depp Performs With Band After Allegations of Abuse

Johnny Depp performed live with his band, The Hollywood Vampires, amid allegations of abuse from wife Amber Heard.

The band has been headlining the Rock in Rio Festival in Portugal, which ran from May 19 to May 29.

Depp, Alice Cooper, Joe Perry, and Duff McKagen performed at the festival in Lisbon. TMZ reported that fans appeared to be extremely supportive of Depp. “Depp and the Hollywood Vampires are headlining the Rock in Rio Festival—and just took the stage well after midnight there. Almost all the fans in the front row said they were there purely to see Johnny—and waited a looooong time for him,” the report stated.

On Friday, Heard, 30, was granted a temporary restraining order against Depp and was seen leaving the courtroom in Los Angeles with a bruise around her right eye. The order requires Depp, 52, to stay 100 yards away from Heard until a hearing in June.

Heard filed for divorce from Depp earlier in the week. In the court filing, she alleged Depp had been abusive “during the entirety” of their relationship. She also claimed he threw his iPhone, hitting her in the face on Saturday.

“It’s an ongoing thing that she needs protection from,” a source told E! News about Heard.. “She did what she had to do to protect herself. It wasn’t an easy decision, but this is the truth. It was very hard for her.”

Depp’s lawyer issued a statement about the divorce and allegations of abuse.

“Her current application for a temporary restraining order along with her financial requests appears to be in response to the negative media attention she received earlier this week after filing for divorce,” Wasser added. “Yet Johnny cannot protect himself or Amber from media scrutiny, and Amber’s anger certainly cannot drive this dissolution proceeding.”