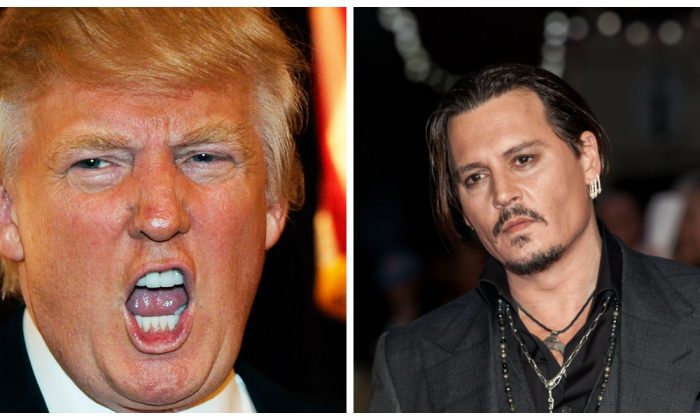 Actor Johnny Depp is the latest to speak out against presidential hopeful Donald Trump. He called Trump a “brat” at a talk at Arizona State University.

The remarks were said during a conversation with Arizona State’s Origins Project founder Lawrence Krauss, about “humanity in madness” on March 12.

The comments come after Depp’s recent portrayal of Trump in the 50-minute comedy, “Funny or Die Presents Donald Trump’s The Art of the Deal: The Movie,” which is named after Trump’s 1987 business advice book.

Funny Or Die Presents Donald Trump’s The Art Of The Deal: The Movie Trailer from Funny Or Die

“It’s not just about being a rich kid—I approached Donald Trump as what you kind of see in him when you really watch him,” said the actor.

“There’s something creative about him in a sense of bullydom. But what he is, I believe, is a brat,” he added.

The audience then broke out in laughter and cheers.

The Golden Globe winner then continued while impersonating Trump’s voice: “Everything is mine. Even if I don’t own it.”

He went on to call the real estate mogul absurd and said: “Reagan back in the day: ‘Mr. Gorbachev, tear down that wall!’ Donald Trump: ‘I’m going to build a wall. And all of my billions are not going to have to pay for it. Because you know why? Mexico is going to pay for it.'”

Depp joins the list of other hollywood stars that have spoken against Trump.

Yes . That is a tear rolling down my cheek dripping off the end of my nose….. This makes me so unbelievable scared and sad…. Not only for our country but for animals that I love more than anything in this world…. My heart is broken into a 100000 pieces ….. I think I may vomit …. That picture on the right is so disturbing…. YOU are not destiny! It is not your job to decide when a living things life is over …. & YOU DT ARE NOT GOD NO MATTER HOW MUCH YOU THINK YOU ARE!!! (& if he doesn’t think he is “God” he thinks he is the fucking chosen one or some shit! We’re all just fucking jam between his rich ass toes! Honestly fuck this shit I am moving if this is my president! I don’t say things I don’t mean! )

John Legend also recently took to Twitter to express his outrage at the treatment of protesters at Trump’s rallies.

Donald Trump Jr. posted on Twitter: “When asked why they were protesting couldn’t even answer. The participation medal/micro-aggression generation is pretty sad!”

Legend shot back and said: “I think they were protesting your racist father. This isn’t complicated.”

.@DonaldJTrumpJr I think they were protesting your racist father. This isn’t complicated.

Louis C.K. also expressed his feelings against Trump recently. The comedian called him an “insane bigot” and compared him to Hitler.