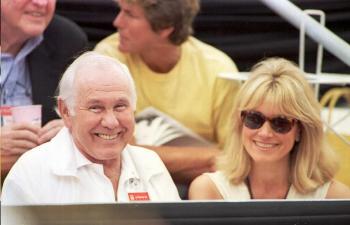 The late Johnny Carson with his wife Alex as they watch a tennis match during the Canadian Open August 17, 1995. (Carlo Allegri/Getty Images )
Entertainment

Carson placed $156.5 into his John W. Carson fund, which he established years before he passed away, The Smoking Gun reported on Monday.

Carson did not make any public statements about the massive donation, according to The Smoking Gun. The donation was found in the John W. Carson fund's 2008 tax return, which was only filed earlier this year in May.

This donation makes Carson the largest philanthropist in all of show business. David Geffen is second with his $80 million charity.

Carson's philanthropic fund grants money to a range of organizations, including environmental groups, hospitals, children's groups, and some charities in Nebraska–his home state.