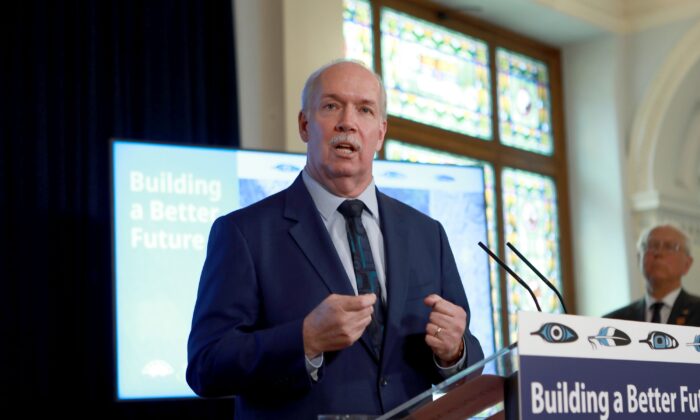 B.C. Premier John Horgan speaks during a ceremony at the legislature in Victoria on March 30, 2022. As chair of the Council of the Federation, Horgan is hosting the 2022 premiers' meeting on July 11 and 12 at the Fairmont Empress in Victoria. (The Canadian Press/Chad Hipolito)
Viewpoints

Can I really be writing about health-care reform again? It’s a First World problem to fear filing the same column twice, because some important aspect of a situation becomes timely and you forget you already said it. I once did it by accident, and the worst part is only one other person noticed. But this time it’s on purpose.

Take Canada’s annual premiers’ meeting… please. Reporters write the same story every year and it doesn’t cost them any sleep, or us, because the politicians act out the same drama with the same script, full of tedious repetitions like “the Chair of the Council of the Federation, emphasized that there was an urgent need to tackle funding shortfalls in the heath-care system.”

First you get ritual acknowledgement of aboriginal ownership of much of Canada that the politicians have no intention of addressing. Then, to quote a columnist on Groundhog Day, in this case July 9, “It’s all shaping up into an inevitable showdown over who will pump more money into the system.” But wait. There’s less. “The federal government … appears to be cool to the idea of spending more, and is looking to take more control over the way provinces deliver health care.”

Once again, such inane public performances on key files is another reason to reject all conspiracy theories requiring these people to have nimble, subtle minds. If they did, the kabuki wouldn’t be as stale as a Timbit under your car seat three weeks after the trip.

If Jane Q. Public somehow blundered into that meeting, she’d probably immediately think to ask the feds pointedly what file they’re currently managing so well that they think they could micromanage, say, the ER in Cold Lake, Alberta, which that columnist noted sometimes closes because it has no available doctor. And gee whiz. If you somehow blundered into my archives and, mistaking a feeble light for the exit, headed for the 1990s, you’d find an April 1993 Fraser Forum piece on a Toronto ER using paying canine and feline customers to raise money to keep their CAT scan running longer for humans. But when news leaked out, instead of starting to charge people as well, they shut down the outside source of revenue and the machine. Problem solved… except for patients.

So I repeat myself on purpose here because this major problem hasn’t changed in 30 years, nor has the solution. The incentives are so wrong in our health-care system that the vast sums we spend aren’t enough and no amount would be, and we need to start rewarding doctors, nurses, etc., for doing things patients want, not things bureaucrats want.

Remember the “Yes Minister” episode where Jim Hacker is appalled to find that the most “efficient” hospital in the UK had been running for 15 months without admitting a patient? It aired in 1981, based on real situations in Britain. But how many Canadian politicians watch that program and draw lessons from it? They have no clue that in centrally planned health care, patients are entirely debit items because their satisfaction brings no benefit to those within the system but treating them costs money. They haven’t even figured out that having the feds pay draws from the same tax base the provinces use, so it doesn’t increase the available money, but it does stifle provincial freedom to innovate.

Too many years ago I was in an editorial board meeting with “Furious George” Smitherman, then inexplicably Ontario health minister, and told him the old Soviet joke about what would happen if the USSR invaded the Sahara. Answer: For 25 years nothing, then a sand shortage. He didn’t produce even the hint of a smile. He didn’t get it.

He’s not a dolt. Even Justin Trudeau would probably surprise you on an IQ test. But our leaders are mentally lazy and incurious, with whatever power their minds have harnessed to running in tight, self-satisfied circles. Perhaps modern politics is especially good at filtering out people who can’t stand repeating the same ideas in the same way over and over again by treating any evolution of a position or exploration of possibilities as a “gaffe.” Commentators and voters bear some responsibility here. But the politicians claim to be in charge so it’s mostly on them.

One final tiresomely familiar essential point. Among our system’s most perverse incentives is that important people don’t spend time on waiting lists. So they tend to dismiss claims of the lists’ length and severity as anecdotal, and even if they see the light they do not feel the heat to fix them. Think John Horgan waited months for assessment and treatment? But they lack even the imagination to squirm at imposing one rule for me, another for thee.

Bored? Then please stop me from writing this column again… by making it unnecessary.