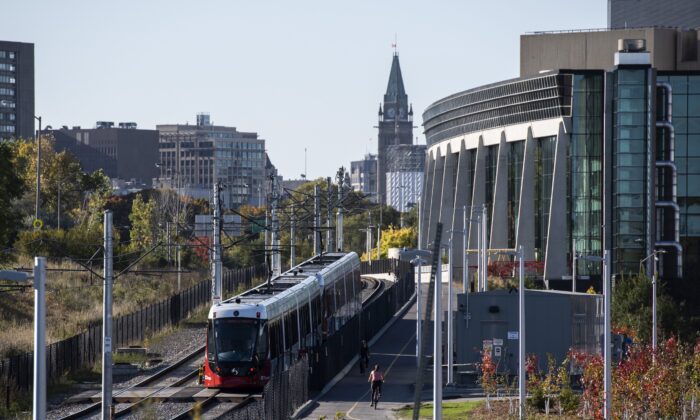 John Robson: Light Rail Megaprojects Cost Too Much and Deliver Too Little

When the transit gravy train comes to town you won’t be on it. But somebody will, so look out.

Here in Ottawa, we gaze in weary resignation at headlines like “City says expansion of western LRT delayed up to one year” as our much-vaunted light rail crashes expensively into yet another bizarre obstacle. Sure, it’s a big project. But it’s not like subways are a new thing, so why didn’t they see it coming?

It’s especially aggravating to read, “The western extension could be the most technically delicate part of the $4.6-billion, three-direction Stage 2 project” because the “O-Train” has already encountered technical delicacies like wheels that were “not perfectly round” and cars tested with the wrong kind of snow. So we could be in a heap of trouble when they get to really fiddly stuff like doors not opening or trains derailing or stations smelling of sewage.

No, wait. We already had all those headaches. And at the risk of adding unpleasant gloating sounds to the list, I always opposed Ottawa light rail, including telling then-mayor Larry O’Brien nearly 15 years ago that as a boy I wanted a train set like the cool kids but they cost too much so we didn’t buy one. (He got the point, unlike former Ontario health minister George Smitherman when I told him the joke about the USSR invading the Sahara.)

So yes, I’m a smart aleck. Partly because I read books on economics. Including Bent Flyvbjerg, Nils Bruzelius, and Werner Rothengatter’s “Megaprojects and Risk: An Anatomy of Ambition” in 2006, three years after it was published. And once more, from the rooftops, how many city councillors do you suppose have done so? Or would care if they did?

Light rail has powerful ideological momentum because the smart set are convinced “livable” cities require cramming people into high-rises, infilling residential neighbourhoods until all streets are forbidding concrete canyons, and prying us out of our cars. That we shleps do not wish to live this way is no obstacle to their grand utopian vision. But there’s another problem.

Megaprojects consistently cost too much and deliver too little because the “failure” from the point of view of users and taxpayers looks very different to the two groups on the inside. Who has ever been punished for all the O-Train’s woes? Only citizens.

I get that books on economics might not be your idea of summer fun. But like horror movies, once you start it’s hard to look away as the gruesome denouement unfolds inexorably. And while Henry Hazlitt reduced all of economics to one sentence about considering effects on everybody over time, not just benefits to immediate winners, I can do it in two words: “Incentives matter.”

An enormous amount of public policy consists of people deliberately ignoring that principle, thinking the “laws” of economics are like those of municipal zoning and can be altered or waived at will, rather than like those of physics that bite you hard if you disregard them. (I would mention here how Canadian health care deliberately avoids rewarding people who satisfy patients, but it would take us too far afield, possibly to the United States, to which patients and practitioners flock while politicians cluck.) But when you get the incentives wrong, bizarre blunders and feeble excuses run like clockwork.

So if you’re just going to read one passage from “Megaprojects and Risk,” make it this one: “Cost overrun today is in the same order of magnitude as it was ten, thirty or seventy years ago” and while “No learning seems to take place in this important and highly costly sector of public and private decision making” actually “strong incentives and weak disincentives for cost underestimation … may have taught project promoters what there is to learn, namely that cost underestimation and overrun pay off.”

They pay off because these “errors” deliver precisely the anticipated benefits to contractors and politicians. Cash keeps flowing to companies because once you get started you can’t stop, and penalty clauses are deliberately small enough to be an acceptable PR cost of doing business. And mayors and councillors get lauded for their vision when the projects start, which helps them get elected or appointed to more prestigious and lucrative posts, or retire with cushy pensions, before the inflated bills come due.

“Megaprojects and Risk” makes some useful suggestions about tackling this problem, like requiring private capital without public guarantees. But no solution will get implemented until people realize such debacles don’t result from random, unforeseeable mishaps like snow and salt in winter in Ottawa. So if you think I’m a dogmatic loudmouth, answer me this:

Why did I know two decades ago, when all the wise persons did not, that Ottawa light rail would be a costly, unstoppable nightmare? And that yours will be too?