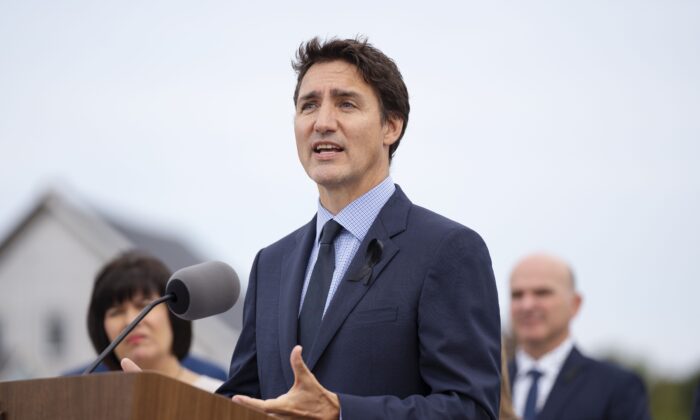 Whatever is to be done about Canada’s economic problems? Actually, you don’t need to worry because (a) we don’t have any problems given the wisdom and compassion of those in charge, and (b) they just fixed those problems with more of what caused them.

If you follow politics closely, including its rhetorical aspect, then (a) I pity you, and (b) you already know it has become common to describe any panicky response to an unforeseen disaster as “continuing to” do whatever you just cobbled together. But it is true that in certain important ways there is continuity.

Consider the Trudeau administration’s response to Pierre Poilievre’s victory in the Tory leadership contest. I don’t mean the tasteless Sept. 10 press release by two deputed bad sports (MPs Dominic LeBlanc and Rachel Bendayan) saying, “On behalf of Liberals across Canada, we want to congratulate Pierre Poilievre on becoming the leader of the Conservative Party of Canada and the Official Opposition. … [W]e will stand up and speak out against the reckless policies that Mr. Poilievre has been pushing since the start of his leadership campaign, and during his nearly 20-years as a Conservative insider.”

It is significant that they can’t turn off the snarling for one single press release. Even Jagmeet Singh was more gracious. But what I have in mind is the one from the prime minister himself on Sept. 13 that “Canadians are feeling the rising cost of living, particularly through higher food prices and rent” from which he will continue to save us.

It was obviously totally someone else’s fault, as always. Thus, “While inflation is a global challenge – caused by the COVID-19 pandemic and Russia’s illegal and unjustifiable invasion of Ukraine” and totally unrelated to the Bank of Canada flooding the system with money to cover a reckless spending-and-borrowing spree to cover reckless, harsh, protracted lockdowns, “we are helping families weather its impacts by working to put more money back in the pockets of the middle class and those working hard to join it this year.”

As journalist George Bain once commented, such prose would “make a plaster statue gag.” And look for a lot more white dust on the floor, because the release went on, “The Prime Minister, Justin Trudeau, today announced that the government’s first pieces of legislation introduced in the upcoming Parliamentary sitting would make life more affordable for Canadians who need it most.”

Gosh. Lucky us to be governed by someone with such powers. Of course with government so big, clumsy, overextended, and arrogant, any fool could make life more affordable by ripping out red tape, repealing laws, easing off on the governmental hiring spree that has seen 86 percent of Canada’s job growth since February 2020 occurring in the overpaid and underperforming public sector, ceasing to plunge the future of our children into debt, getting a handle on inflation, etc.

To fix it by making it worse takes special abilities. And he’s sure he has them: “The measures in these bills would: Double the Goods and Services Tax Credit (GSTC) for six months” which he actually boasts goes to over a quarter of the populace, “Provide a Canada Dental Benefit to children under 12 who do not have access to dental insurance” while our public health system crumbles despite gobbling up catastrophic sums, and “Provide a one-time top-up to the Canada Housing Benefit to deliver $500 to 1.8 million Canadian renters who are struggling with the cost of housing” because everybody eligible to vote deserves as much free money as needed to clarify their choice. “This new one-time federal benefit will be in addition to the Canada Housing Benefit currently co-funded and delivered by provinces and territories.” Whee! Handouts for all! Make everyone wards of the state thanks to the bottomless governmental cornucopia!

Or rather, having done it, they concluded with their usual facile self-satisfaction that it was because their incredibly generous and wonderful system of government handouts that worked wasn’t nearly generous enough to work, so here we go again. So “This targeted support package totals more than $4.5 billion, of which $3.1 billion is in addition to funding previously allocated in Budget 2022.”

As you see, there is no problem because they already solved it and are continuing to, using the same methods that caused it. As usual.