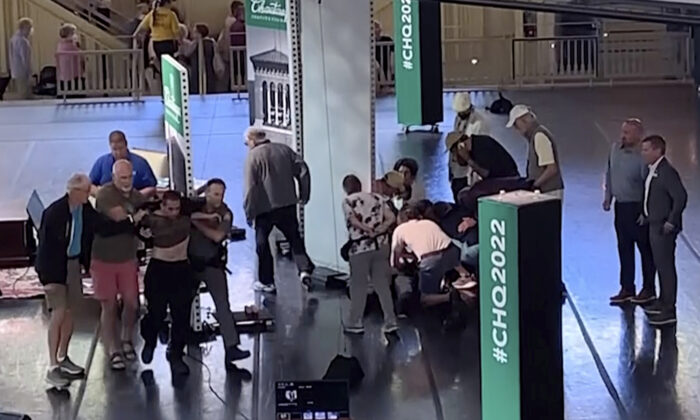 Hadi Matar is escorted from the stage after allegedly stabbing author Salman Rushdie as people tend to Rushdie at the Chautauqua Institution, in Chautauqua, New York, on Aug. 12, 2022. (AP Photo)
Viewpoints

John Robson: In Our Hearts We’re All Heroes, but in the Real World Speaking Up Takes Courage

Would you appear on a platform next to Salman Rushdie? Inside our heads, I suppose, we’re all heroes. We’d have been anti-Nazi in the 1930s, anti-Communist in the 1970s, anti-slavery in the 1850s, anti-Nero in ancient Rome, anti-Nazgul in Middle Earth, and so forth. But in the real world it takes commitment and courage that isn’t always ready to hand.

Courage is a perennial problem. Aristotle called it first among virtues, because without it we only practise the others when convenient. And while it shouldn’t be any harder to be brave today than 200 years ago or 2,000, as Aristotle also said, habit is second nature. So a failure to practise on small things can leave our bravery flabby or even absent when we need it to be ready aye ready on big ones.

Here in Canada, for instance, the Trudeau administration is ramming through Bill C-11, “An Act to amend the Broadcasting Act and to make related and consequential amendments to other Acts.” I could devote a few scathing remarks to an electorate that tolerates multi-page, incomprehensible “related and consequential amendments to other Acts,” and with them broken promises about omnibus bills that reduce the legislative process, and the structure of self-government it supports, to a partisan mockery. But instead let’s focus on the “amend the Broadcasting Act” part about censoring the internet so people don’t get hurt feelings.

If I were to attempt to catalogue all the ways Bill C-11 offends against freedom and justice, we’d be here all week. Including its insistence on treating people differently on the basis of race, which I’m convinced most Canadians dislike but are too intimidated to denounce. But the key at the moment is the state giving itself the power to regulate user-generated content, which it swears it would never use but mysteriously won’t relinquish.

It’s an appalling breach of free speech, partly because it’s so casual. When I was a boy, everybody went around quoting Voltaire that “I disapprove of what you say, but I will defend to the death your right to say it.” (Which is more than Voltaire ever did; it’s a paraphrase of his position from Evelyn Beatrice Hall’s 1906 “The Friends of Voltaire.”) Now, like Donald Duck in Disney’s “Three Musketeers,” too many emit a panicky squeak of “die?”

I don’t know if everybody back then was also given to quoting John Stuart Mill’s classic three-fold defence of free speech in “On Liberty,” because my childhood was unusually Mill-rich. (My first paid job was proofreading “An Examination of Sir William Hamilton’s Philosophy.”) But it went, and still goes: 1) An unfamiliar and even unwelcome view might turn out to be true; 2) If untrue, it is best destroyed by open discussion; and 3) Successfully defending familiar truths injects vitality into clichés.

We need all three today. But by failing to practise them in comparative safety, we’ve lost much of our capacity to defend them under attack. Instead, schools churn out “social justice warriors” who recite a detailed script of views acceptable to political and educational authorities, from climate change to COVID-masking to transgenderism, never challenge any of them, and genuinely believe conformity is high-order courage.

To a troubling degree we also now lack the desire to defend free speech. For many decades deconstructionists, multiculturalists, and other relativists have been telling us there is no absolute Truth, just “my truth,” “your truth,” some ethnic group’s “truth,” and whoever gets most offended wins the battle of wills that has superseded the battle of ideas, leading to a triumph of the will by the bully and the brute.

Hence the whole concept of “hate speech,” that is, banning things that do not incite violence, engage in conspiracy, or constitute libel, but someone finds rude. Especially someone with more backbone than we have, and a knife.

Back when there were death threats against Danish cartoonists, and a murderous attack on “Charlie Hebdo,” I insisted on publicly displaying the offending cartoons. But most outlets wouldn’t, because while we’d love to face genuine danger in defence of freedom, we’re boldly “defying convention” by dying our hair pink that day or something.

Thus The New York Times, NBC, and the Guardian all insisted that police had no conception of the motive for this guy stabbing Salman Rushdie. Which almost certainly means he was shouting Allahu Akhbar and they lack the physical or moral courage to draw the obvious conclusion. And Canada regularly features protests openly featuring disgusting anti-Semitic statements, but woe betide the “deadnamer.”

For my part, I long ago read two of Rushdie’s novels and nothing would induce me to read another. But any time he’s in town, and you need someone next to him on stage, or between him and any armed Islamists in the audience, I’m ready and willing.