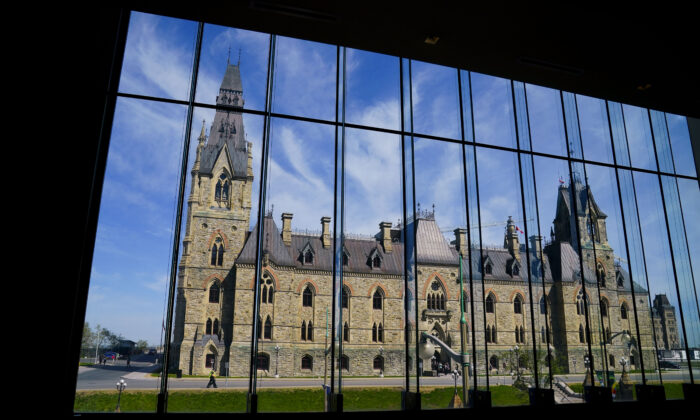 The West Block of Parliament Hill is seen through the window of the Sir John A. Macdonald building in Ottawa on May 11, 2022. (The Canadian Press/Sean Kilpatrick)

Last week I said I wasn’t angling for a consulting job with the government. I have changed my mind. For a modest $250 an hour or so, plus “expenses,” I’ll advise them on how to employ fewer other consultants.

It seems everyone else is a bureaucrat, public sector consultant, or consultant who used to be a bureaucrat, and I have FOMO (Fear Of Missing Out) on inflation-adjusted pensions. But I also find it curious that Canada should have seen a massive simultaneous expansion in the public sector and in the number of consultants it needs to do its work for it… badly.

As John Ivison recently noted, the PBO says Canadian public service personnel costs soared from $39.6 billion in 2015 to $60.7 billion today, up 53 percent or 6.7 percent annually. (In unrelated news, inflation is rising so fast the Bank of Canada contrived to lose money printing the stuff.) Partly it’s raises and bonuses, regardless of performance or circumstance. But also a personnel increase from 342,000 to 391,000, about 14 percent, while private sector finks and losers were trimming staff.

Yes, an extra 50,000 new bright young agents of change, or whatever the consultants said to call them. And don’t forget DEI, because even with a remarkable range of diversity with regard to competence, and inclusion with regard to its absence, you should accidentally get 20,000 or so who are pretty good at their jobs. So why did the bill for outside consultants to do them instead also explode?

Some of this consulting stuff is just jobs for the kids. Former public servants, and lobbyists who might hire them later, get lots of government money in a complex act of mutual back-scratching. Like when McKinsey’s then “global managing partner” and later our ambassador to communist China actually sat in on cabinet meetings giving “free” advice, then the firm got some very not-free contracts.

Also, the federal prison service is spending nearly $11 million a year on “spiritual healing” services. But if we need shamans in our jails, why not staff “chaplains” from every imaginable faith? Why 125 expensive outsiders? Not buying friends, are we?

Still, let us not be unduly cynical. Most of the trouble in the world is caused by people who are so sincere that they lack self-awareness. Like the National Gallery of Canada, during a very woke, very mysterious, very Canadian meltdown, hiring a consultant for over $126,000 to black out information in Access to Information requests. A former public servant, of all things.

On lacking self-awareness, I could mention the prime minister calling Pierre Poilievre a divisive white male supremacist. Or his presiding over a vast expansion in the size and cost of government unrelated to any expansion in its capacity to perform basic tasks. Why, he even spent over $200,000 on a “deliverology” consultant and got, well, a bill. And appointed a high-ranking bureaucrat to cover the same file with equally feeble results.

Apparently the public sector, or at least its union, resents the money going to outsiders instead of bureaucrats. If you need questions not answered, they’re ready aye ready. Thus, the head of the Public Service Alliance of Canada bluntly denounced this “reliance on quick fixes through multimillion dollar outsourcing and consulting deals” as an “embarrassment.”

Which it is. What you’re seeing is people who do not understand practical difficulties, or believe they exist, taking the easy way out by throwing money at problems. The CBC says the union representing Canada Revenue Agency workers wants a 30 percent increase over three years because CBSA staff get even more. But quick: how many people work at the CRA? Ten thousand? Twenty-five? Keep going. Forty-five? Close now. It’s 55,000. Nearly one-seventh of the federal work force. But just try to get them on the telephone and if you do, extract a straight answer. Solution: Give them more money… and hire them some IT consultants.

For all the publicity McKinsey has lately garnered, and I hope it hurts, its fees are as the National Post observed just a drop in the consulting bucket, or bathtub, or ocean, or whatever can hold it all. You see, “the federal government spent no less than $22.2 billion in 2021-2022 on contracts across all public service departments, agencies, and organizations.” Except not, because this Carleton University study only counted sums from agencies that “proactively disclose their contract spending.” And proactive disclosure isn’t exactly a federal government watchword.

They have consultants to help prevent it. And others to advise you, if government isn’t working, to hire more people who think like you for more money. On salary and on contract. Especially Modern Monetary Theorists who say budgets balance themselves if you own the printing press.

They’re queueing up to sell you what you want to hear, in language fit to anaesthetize the public. And I want some.

John Robson
John Robson is a documentary filmmaker, National Post columnist, contributing editor to the Dorchester Review, and executive director of the Climate Discussion Nexus. His most recent documentary is “The Environment: A True Story.”