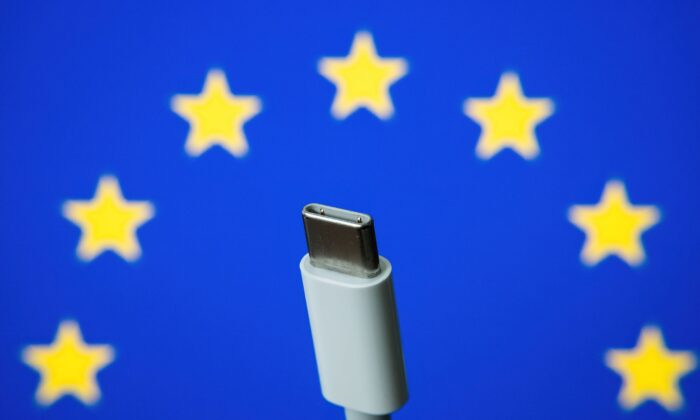 The European Union has approved a plan that would force all companies to make mobile devices compatible with the USB-C charger. (Mundissima/Shutterstock)
Viewpoints

Although I am not by nature a violent person, just irritable, it is probably for the best that I’ve never met whoever decided the original USB “A” plugs would only go in one way. For although I am not by education an engineering person, just a know-it-all, I am passionate about efficient and inefficient designs including “affordances,” controls that work in obvious ways. But if you think being not by temperament a socialist person, just an economist, I’m happy about the European Union ordering device-makers to standardize around USB-C, guess again.

To be clear, to make USB-As not reversible and then have their outside shape not indicate which way is “up” is design idiocy squared. And while these twin flaws make it natural, on encountering resistance, to rotate it and try again, that it has often taken me five or six tries to get it right indicates that I am defective too. But this column is not about me.

Despite which I should also confess that the USB’s frustrating evolution has left me with a crate full of cables from dusty A-As to the “mini-B” that are still mysteriously audiovisual standard, big clunky square things, I forget what they are, micro-Bs, micro-B 3.0s, and now mercifully Cs. (Plus ethernet cables, HDMI converters to obsolete standards, VGA cables and… what’s this? Phone wire?) And yes, it’s beyond infuriating that there’s no standardization even of cable colours to say sure, your two devices and connecting hub could exchange bits at an awesome rate that by next Thursday will be contemptible, but this archaic cable is clogging everything up.

Yeah, yeah, a blue plastic doodad inside normally means 3.0. But wouldn’t a blue dot outside be less obtuse? So it’s not just governments that call to mind Robert Conquest’s dictum: “The simplest way to explain the behavior of any bureaucratic organization is to assume that it is controlled by a cabal of its enemies.” It is frequently mysterious to contemplate the decisions taken by people in competitive markets designed, apparently, to drive customers from their door so they can nap in penurious peace.

My many examples include idiotic, perky phone bots. But how long it took successive generations of USBs to incorporate symmetry is high on my list. Mind you, Apple’s lightning cable is symmetrical. Though just on one end (I believe). So the EU is banning it.

You might think with all that ranting and raving about stupid cable design I’d be glad somebody with clout stepped in to sort it out. Government to the rescue. Unless you’d read my previous writings and knew of my skepticism about government’s capacity to make better decisions about your life than you can, or even worse ones quickly and politely at tolerable cost. Based not on “ideology” but on the specific ideology that if humans struggle to treat clients with intelligent compassion even when (a) motivated by fear of losing customers and (b) still in business because so far they’ve coped adequately, they’ll do far worse if their “customers” can’t leave the store.

For instance, the “Minitel” the French government tried to impose instead of that silly Anglo-Saxon internet thing. (RIP 30/6/2012.) Or when people say oil must eventually run out and we’ll need “alternatives” so government should stomp in now, forbid choice and experiment, and instead shower money and regulatory advantages on whatever they suppose we’d want if we had any brains. It does not follow.

Pride being the most dangerous of the seven deadly sins, we stubborn, self-regarding humans do not like to admit mistakes. Companies must or they go bust, solving the problem for the rest of us one way or the other. But governments have a great many ways of not admitting mistakes, from the obnoxious to the lethal.

Markets aren’t perfect, of course. Nothing involving people is. But while my cooking has better and worse days, Soviet factory canteens only had worse days.

Here it’s worth noting that the EU barged in to forbid choice just when we’re finally getting USB C-C connections that are fast and symmetrical. So they’re solving a problem the market already solved, at the expense of its capacity to solve the next one, including right here.

Bigger files drive faster transfer speeds and vice versa. It’s not illogical in this world, the only one we have, in which tradeoffs matter (one reason few engineers are liberals). The more information we can process and exchange without undue delay the better. Including the information that USB-C is therefore not digital nirvana.

USB-D won’t bring back asymmetry unless someone contracts out the design to Screwtape and Wormwood, Inc. But when it does come along, everyone in the EU will have to stick adapters into their phones.

It won’t be fatal. But it will be very irritating. And for what?