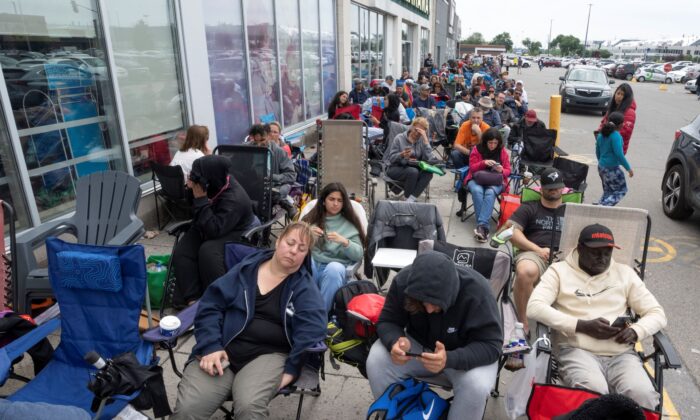 People sit in chairs to ease the long wait outside a passport office in Montreal on June 22, 2022. (The Canadian Press/Ryan Remiorz)
Viewpoints

Something does not compute. Well, quite a few things. But here are two. The Canadian government, unable to fulfil the very basic function of getting citizens passports without travel-plan-wrecking delays, leaps into committee by creating a 13-plus-minister task force on how to do something it or its predecessors have been doing since 1862 while the prime minister saves the world effortlessly.

He assures us it is so. A June 25 press release intoned, “The Prime Minister, Justin Trudeau, today concluded his participation in the 2022 Commonwealth Heads of Government Meeting (CHOGM) in Kigali, Rwanda, where he worked closely with international partners to address key priorities, like food security, climate change and gender equality, and make life better for people.” Just that? Not world peace?

Mais bien sûr. Far from merely working closely with other persons of state like Hakainde Hichilema (with whom he quickly “agreed to work together to improve food and energy security, support ambitious climate action, create opportunities for youth, and make life better and more affordable for people around the world”), Trudeau “drove action to address these challenges and reaffirmed Canada’s unwavering commitment to the core values that must bring the countries of the Commonwealth together: free and democratic societies and the promotion of peace and prosperity to improve the lives of all people.”

Man. He can do that? Totally. The press release title drove home that “Prime Minister drives action on food security, climate change and gender equality.” One wonders if the other leaders privately agree that he got them off their sorry behinds to save humanity. And why didn’t he work his magic on a few minor details here before whooshing off to Rwanda, Germany, and Spain to hobnob with his fellow wizards like Boris Johnson, with whom he exchanged jolly whose-private-jet-is-bigger jokes that seem to the untutored to make a mockery of their climate alarmism.

Speaking of the untutored, some may have balked at the state being unable to issue passports in anything resembling a timely manner before even getting to its juxtaposition with the “make life better for people” thing. (As opposed to whom, I’d ask, but I fear angry letters from cats.) After all, issuing documents is a very simple if banal function, and while it is of course necessary to follow basic security procedures from verifying identity to printing hard-to-fake hard copies, a combination of modern technology and long practice ought to render it so routine that even governments can do it in their sleep.

Alas, our government cannot. Just as it cannot clear parked trucks without invoking the Emergencies Act, produce a coherent accurate account of why it invoked the act, buy military equipment, control inflation, or a lot of other things you’d think it could manage. And this crisis of basic competence would merit our attention even if it were happening in what could be described as a rational manner.

Here you may well object that there’s no rational way such tasks could prove so difficult. But if it happened anyway, it would certainly be rational for everyone involved to take a deep breath, put the world-peace/hunger-ending/gender-revolution/weather-fixing plans on hold, and tackle basic housekeeping. As Jordan Peterson says, don’t save the world until you can clean your room.

Instead, some PMO communications guru spooned this passport pablum into the boss’s mouth: “We know service delays, particularly in recent months, are unacceptable. We will continue to do everything we can to improve the delivery of these services in an efficient and timely manner, and this new task force will help guide the work of the government to better meet the changing needs of Canadians and continue to provide them with the high-quality services they need and deserve.”

The habitual “continue” when trying without success to admit they’ve muffed something is as galling as the “unacceptable” when they accepted it. (And don’t get me started on Chrystia Freeland chirping “I truly believe that we’re going to get through this together” on their economic mismanagement.) But on the “changing needs” cliché, even if the Just Society radically altered the structure and needs of the human personality since 1968, getting a passport in time to take a trip is one of those humdrum things even your grandfather would have understood and wanted. (Unlike, say, “Snapchat.”)

At some point people who’ve heard of humility might decide to stop gallivanting around pontificating about a “rule-based international order” and occupy their desks long enough to do something concrete about productivity, housing, and that business with the documents you can’t travel without. No, not the digital ID to save us all from plague. The one with the picture where you can’t smile.

Not that anyone who’d been through the lineups you get nowadays, or read the smug press releases they put out anyway, would be inclined to do so.