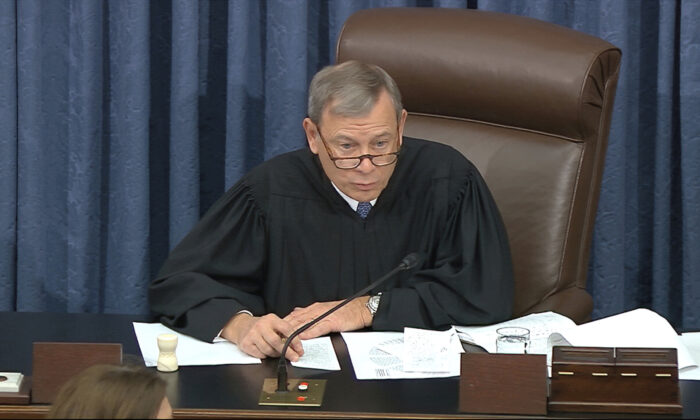 Supreme Court Chief Justice John Roberts calls for the vote on the motion to allow additional witnesses in the impeachment trial against President Donald Trump in the Senate at the U.S. Capitol in Washington on Jan. 31, 2020. (Senate Television via AP)
By Zachary Stieber

Supreme Court Chief Justice John Roberts revealed that he would not break any ties that arise during the Senate impeachment trial of President Donald Trump, answering a question that drove widespread speculation.

Political observers and lawmakers wondered whether Roberts, who is presiding over the trial in Washington, would step in to break a tie in the vote to call more witnesses if it ended at 50-50. Senate Minority Leader Chuck Schumer (D-N.Y.) presented Roberts with a question on Friday before the vote ended up being 49-51 that Roberts used to end the speculation.

Schumer, 69, asked Roberts, 65, if he was aware of two tiebreaking votes made by Supreme Court Chief Justice Chase during the 1868 impeachment trial of President Andrew Johnson. Roberts said he was, but wouldn’t serve a similar role if a tie did arise during the trial.

The two votes case by Chase concerned a motion to adjourn and a motion to end deliberations. Roberts responded, adding, “I do not regard those isolated episodes 150 years ago as sufficient to support a general authority to break ties.”

“If the members of this body, elected by the people and accountable to them, divide equally on a motion, normal rule is that the motion fails. I think it would be inappropriate for me, an unelected official from a different branch of government, to assert the power to change that result so that the motion would succeed,” he said.

Before Sen. Lisa Murkowski (R-Alaska) announced her intention to vote against witnesses, there was a possibility that she and two other Republicans would join Democrats, making the vote for witnesses and documents 50-50. People did not know if Roberts would step in to break the tie or whether the motion would fail without Roberts stepping in.

Roberts was appointed to the Supreme Court in 2005 by Republican President George W. Bush. He has drawn criticism from both sides of the aisle, siding with other Republican-appointed judges on some major cases but opposing them on others, including a major ruling on the Affordable Care Act, also known as Obamacare.

Murkowski said she was voting against the motion in part because of people attacking Roberts.

“It has also become clear some of my colleagues intend to further politicize this process, and drag the Supreme Court into the fray, while attacking the Chief Justice. I will not stand for nor support that effort. We have already degraded our institution for partisan political benefit, and I will not enable those who wish to pull down another,” she said in a statement on Friday before the vote.

“At a time when large majorities of Americans have lost faith in government, does the fact that the chief justice is presiding over an impeachment trial in which Republican senators have thus far refused to allow witnesses or evidence contribute to the loss of legitimacy of the chief justice, the Supreme Court, and the Constitution?” the question stated.

Roberts, in his presiding role, read questions submitted by senators on Wednesday and Thursday.

House impeachment manager Adam Schiff (D-Calif.) stood in front of Roberts after Warren’s question and appeared to try to defuse the situation. “I would not say that it leads to a loss of confidence in the chief justice,” Schiff said. Roberts, he added, had “presided admirably.”