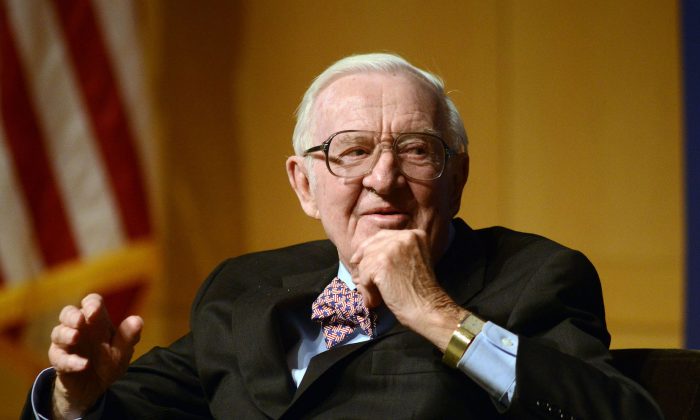 WASHINGTON—Former Justice John Paul Stevens, a Republican appointee to the U.S. Supreme Court, died on Tuesday at age 99, the court said in a statement.

Stevens, who retired from the court in 2010 at the age of 90—the second-oldest justice in the court’s history—died at a hospital in Fort Lauderdale, Florida, of complications from a stroke he suffered on Monday, the statement said.

Stevens was appointed by President Gerald Ford in 1975 and became one of the longest-serving justices in U.S. history. Still in good health when he left the bench, he carved out a new role as a critic of some of his former colleagues on issues such as voting rights, campaign finance and the death penalty.

“He brought to our bench an inimitable blend of kindness, humility, wisdom, and independence. His unrelenting commitment to justice has left us a better nation,” Chief Justice John Roberts said in the statement.

The idiosyncratic Stevens, known for wearing a bow tie with his traditional black robes, initially built a record as a maverick with a reputation as a non-partisan, highly independent jurist. His views evolved during his time on the bench, not least on the death penalty, which he initially supported. In 2008, he announced that he believed it was unconstitutional.

He also embraced other liberal positions by supporting abortion, gun restrictions, limits on government aid for religion and legalization of marijuana. In 2014, he published “Six Amendments,” his proposals for changing the U.S. Constitution to tighten gun control and limit money in politics, among other things.

At the ideological center of the court, Stevens often authored separate concurring or dissenting opinions that reflected his hard-to-label judicial philosophy.

But as the court moved to the right in the early 1990s under Chief Justice William Rehnquist, Stevens became the leader of the liberal faction that included three other justices.