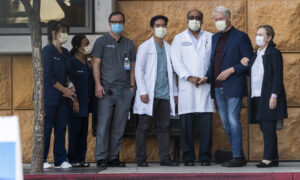 The Old Navy advertisement that featured an interracial family spawned a range of opinions on Twitter—including one from Lt. Jack McCain, son of Ariz. Sen. John McCain.

The serviceman uploaded a photo of himself and wife both in uniform—Swift McCain is an Air Force Reserve officer—onto his page on May 2 with the caption: “To the people upset about the #OldNavy ‘Scandal’ of an a picture of a mixed race marriage, eat it. @Reneeitchka.”

To the people upset about the #OldNavy “Scandal” of an a picture of a mixed race marriage, eat it. @Reneeitchka pic.twitter.com/yA5YwbZRcm

And if naysayers were still unconvinced about McCain’s opinion, he posted another photo of the couple on their wedding day.

“I hope this one burns too, you ignorant racists. Here is us on our wedding day. @Reneeitchka,” he captioned the photo of himself kissing the hand of his wife.

I hope this one burns too, you ignorant racists. Here is us on our wedding day. @Reneeitchka pic.twitter.com/1VSd2gqH9W

In an interview with Navy Times on Tuesday, May 3, McCain further explained his disgust, stating that “The mere fact that this is a conversation in the year 2016 is disheartening.”

He added: “I did not intend for this level of exposure. Mostly, I wanted to take a principled stand on an issue that shouldn’t be one in the first place,” McCain said in an email. “If there is one result I could hope for out of all of this furor, it would be helping to ensure that intolerance has no place in service, or in our national discourse.”

Swift tweeted her support of Old Navy with a photo of the couple as well.

I was just in @OldNavy this weekend! Bought something for me and my husband. #LoveWins pic.twitter.com/fE5s97yDny