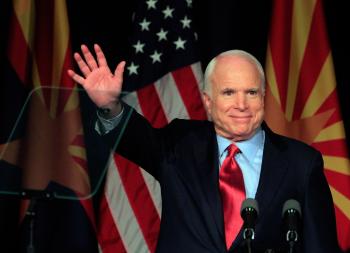 Helena Zhu
View profile
Follow
biggersmaller
Print
John McCain, while he never gained enough momentum to be the nation’s president, is a step closer to serving a fifth term as Arizona senator.

At Tuesday night’s Arizona Republican primary, Sen. McCain, 73, defeated former Rep. J.D. Hayworth, 52, with 56.04 to 32.04 percent to represent the Republican Party in the Nov. 2 general election, according to unofficial results released by Arizona’s office of the Secretary of State.

“I promise you, I take nothing for granted and will fight with every ounce of strength and conviction I possess to make the case for my continued service in the Senate, and the policies and principles I will advocate and defend if I’m fortunate to be re-elected,” McCain said in his victory speech.

McCain predicted that the Republicans will regain control of the House and Senate, outnumbering Obama’s ruling Democrats.

"When we do, we will stop the out-of-control spending and tax increases,” said McCain. "We will secure our borders, defend our nation and bring our troops home from Afghanistan with honor and victory.”

The battle between McCain and talk show host Hayworth has been nasty and filled with name-calling throughout the race. Hayworth accused McCain of not being a genuine Republican, pushing McCain to the right on some issues. McCain spent $20 million on his campaign.

In the November election, 37 of the 100 seats in the Senate will be contested. McCain is expected to easily defeat Rodney Glassman who will represent the Democrats in the primarily red state.