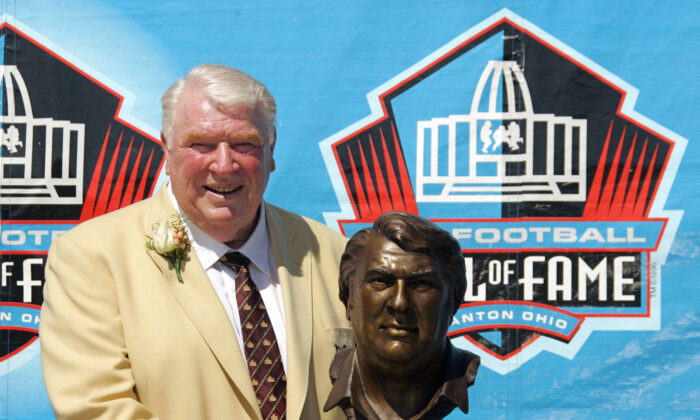 Broadcaster and former Oakland Raiders coach John Madden poses with his bust after enshrinement into the Pro Football Hall of Fame, in Canton, Ohio, on Aug. 5, 2006. (Mark Duncan/AP Photo)
Sports

John Madden, the Hall of Fame coach turned broadcaster, died on Tuesday at the age of 85, the NFL announced.

The NFL said in a statement that Madden passed away unexpectedly and did not provide details as to the cause of his death.

“On behalf of the entire NFL family, we extend our condolences to Virginia, Mike, Joe and their families,” NFL Commissioner Roger Goodell said in a statement. “We all know him as the Hall of Fame coach of the Oakland Raiders and broadcaster who worked for every major network, but more than anything, he was a devoted husband, father, and grandfather.”

“Nobody loved football more than Coach. He was football. He was an incredible sounding board to me and so many others. There will never be another John Madden, and we will forever be indebted to him for all he did to make football and the NFL what it is today,” Goodell said.

Madden was born in Austin, Minnesota, and raised in Daly City, California. He was both offense and defense as a player for California Polytechnic College at San Luis Obispo in 1957 and 1958. Madden was selected as a future choice in the 21st round of the 1958 NFL Draft by the Philadelphia Eagles but a knee injury prematurely ended his playing career.

He began his pro football coaching career in 1967 as the Oakland Raiders’ linebackers coach before becoming head coach. Madden became the youngest head coach in the American Football League when he was hired at the age of 32.

In his first year as head coach at the Oakland Raiders, Madden earned American Football League Coach of the Year honors when he led the team to a 12-1-1 record and an AFL Western Division title.

He went on to coach the team for 10 seasons, during which the Oakland Raiders never experienced a losing season. Madden led the team to the playoffs eight times, including a 37-31 six-quarter AFC Divisional Playoff win over the Baltimore Colts in 1977. In January 1977, the Raiders won Super Bowl XI, beating the Minnesota Vikings 32-14 under Madden’s guidance.

Madden was inducted into the Pro Football Hall of Fame as a coach in 2006 by Al Davis, who opened his speech by calling Madden, “A brilliant coach. A loyal and trusted friend. A Raider.”

“I have never worked a day in my life. I went from player to coach to a broadcaster and I am the luckiest guy in the world,” Madden said in a heartfelt speech at his induction.

Following his coaching career—which he left in part due to his fear of flying —Madden became a household name as a sports broadcaster, providing commentary for NFL games for 30 seasons and covering 11 Super Bowls between 1979 to 2009 for FOX, CBS, ABC, and NBC. He entertained viewers across America and the rest of the world with his famous interjections of “Boom!” and “Doink!” throughout games.

He is widely known for his use of the telestrator, a device that allowed him to draw a freehand sketch directly onto the screen to better explain the game to fans.

Madden won 16 Emmys as Outstanding Sports Personality/Sport Event Analyst and retired as a broadcaster in 2009, following Pittsburgh’s 27-23 win over Arizona in the Super Bowl. During his career, Madden became the face of restaurants, beer, and “Madden NFL Football,” one of the most successful sports video games of all time. He also became a best-selling author.

In a statement on Tuesday, the Raiders said, “Few individuals meant as much to the growth and popularity of professional football as Coach Madden, whose impact on the game both on and off the field was immeasurable.”

“Today, we lost a hero. John Madden was synonymous with the sport of football for more than 50 years,” EA Sports said in a statement. “His knowledge of the game was second only to his love for it, and his appreciation for everyone that stepped on the gridiron.

“A humble champion, a willing teacher, and forever a coach. Our hearts and sympathies go out to John’s family, friends, and millions of fans. He will be greatly missed, always remembered, and never forgotten.”