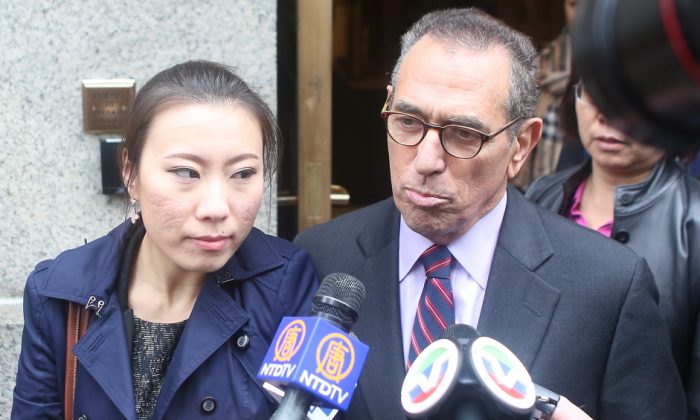 Jia “Jenny” Hou, the former treasurer for Liu’s mayoral campaign, was sentenced by the U.S. States District Court to 10 months in jail and three years under supervision for attempting to commit wire fraud, making false statements, and obstructing justice.

The two were found guilty on May 2 after a jury determined they tried to defraud the people of New York City by recruiting straw donors for Liu’s campaign to illegally obtain public matching funds.

Under the public matching funds program, an additional $6 is given to a candidate from taxpayer money for every $1 donated. The matching funds apply to individual donations up to $175.

Pan apologized before the courtroom for recruiting straw donors. He said he did it believing that by helping his “good friend” John Liu, he would have won Liu as a business client. He said his actions were to “uphold a promise to my good friend.”

Hou gave a similar statement where she apologized to friends and family. She cried as she told the courtroom that she was young and inexperienced, and while seeing fraud take place did not have the courage to say, “hey, what’s going on here?”

Hou, who is not a U.S. citizen, risks being deported back to China.

Judge Richard Sullivan empathized with both of them, yet said the nature of their crimes required harsh sentences in order to defend the integrity of the American electoral system.

“What makes it a serious crime is that it compromises and undermines an institution that is the cornerstone of free government,” Sullivan said, responding to Hou.

Letters filed with the court that were sent from the prosecutors to Sullivan recommended longer sentences for Hou and Pan. Similar letters from defense lawyers asked for reduced sentences.

“Based on the extent of Hou’s misconduct, a Guidelines sentence is necessary to reflect the seriousness of the offense, to promote respect for the law, to provide just punishment, and to afford adequate deterrence generally to criminal conduct,” one of the letters states.

Hou and Pan were charged using evidence gathered by the FBI, using an undercover investigator.

An undercover agent obtained video and audio evidence of Pan discussing and arranging an event to funnel an illegal contribution into Liu’s campaign through straw donors.

The FBI undercover agent posed as a Texas businessman looking to get a New York politician in his pocket by making an illegal contribution. As part of the deal, Pan arranged for a private meeting between Liu and the undercover agent, which was intended to seal the deal.

Evidence was also collected  against Hou through her email, phone, and chat logs, which the FBI obtained through warrants. It also included campaign documents.

Liu was denied public matching funds for his mayoral campaign by the Campaign Finance Board (CFB), based on findings from the FBI, an internal investigation, and a third-party investigation.

A third-party investigation by Thacher Associates investigated 85 of the donations flagged by the CFB and found additional straw donors, unnamed intermediaries, false information, and other problems. The report concluded that there is likely more fraud still to be uncovered in Liu’s campaign.