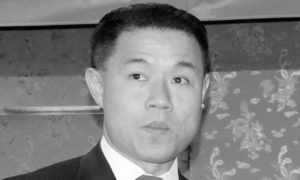 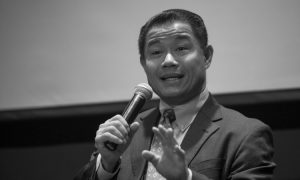 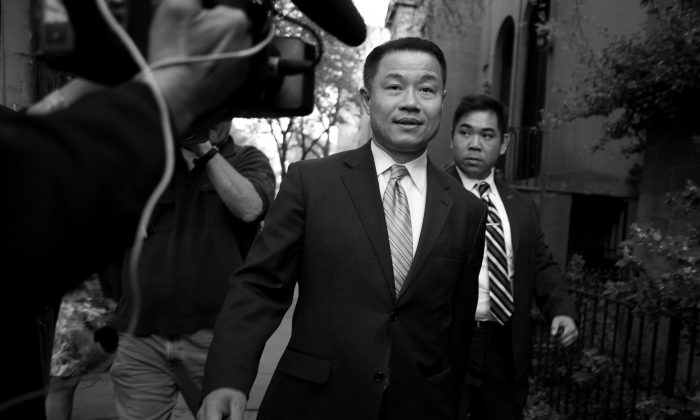 New York City Comptroller John Liu leaving a press conference in Brooklyn May 2 after two of his aides were found guilty of attempted wire fraud in conjunction with his comptroller campaign from 2009–2011. Liu is also a NYC mayoral candidate. (Samira Bouaou/Epoch Times)
John Liu Unmasked

“As the jury found, Jia Hou and Oliver Pan stuck a knife into the heart of New York City’s campaign finance law by violating the prohibition against illegal campaign contributions, all to corruptly advantage the campaign of a candidate for city-wide office,” said Preet Bharara, U.S. Attorney for the Southern District of New York, in a statement.

“Cases like this give the people of New York yet another reason to be troubled by the electoral process, and they have a right to demand fair, open, and honest elections untainted by cynical subversion of campaign finance laws,” Bharara said.

“With these convictions, it is our hope that some measure of the public’s confidence can be restored,” he said.

Speaking at a press conference in Brooklyn this evening after the verdicts were made public, Liu said, “I am deeply saddened by the turn of events today.”

In response to reporters’ questions, Liu said Hou was a capable and good person who he believes in. When asked about Pan, Liu declined to answer, saying instead “I said what I said about Jenny.”

The charge of wire fraud was based on whether Pan and Hou intended to illegally obtain public matching funds, which are transferred by wire.

Pan had admitted to an undercover federal agent that he organized a fundraising event using straw donors to illegally funnel contributions into Liu’s campaign.

The decision could make Liu’s 2013 mayoral campaign ineligible for campaign matching funds from the Campaign Finance Board (CFB).

“The CFB will determine in the coming months which candidates seeking public matching funds for the 2013 elections have qualified for payment, considering all the information available,” stated Matt Sollars, press secretary of the New York City Campaign Finance Board.