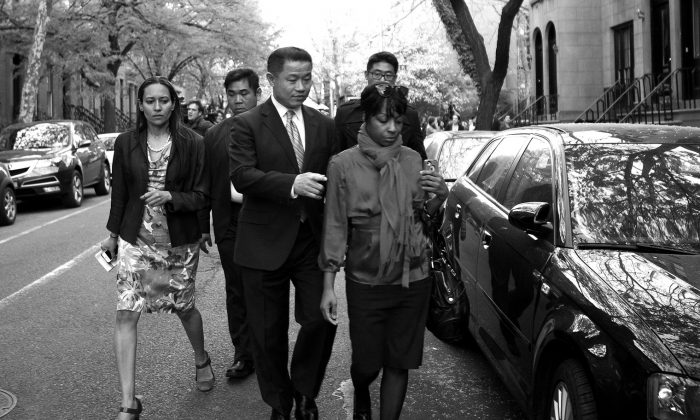 New York City Comptroller John Liu leaving a press conference in Brooklyn May 2 after two of his aides were found guilty of attempted wire fraud in conjunction with his comptroller campaign from 2009–2011. Liu is also a NYC mayoral candidate. (Samira Bouaou/Epoch Times)
John Liu Unmasked

NEW YORK—Over $3 million in campaign matching funds may be at risk for mayoral candidate John Liu after the May 2 grand jury verdict of guilty for Liu’s former campaign treasurer and a former fundraiser.

On May 2, the same day the verdict was announced, the Campaign Finance Board (CFB) sent out the paperwork to all 2013 candidates who may qualify for matching funds under the city’s program, which allows for an additional $6 in public funds for every $1 in qualifying funds obtained through legal fundraising.

As of the March filing, Liu had a total of $3.2 million in his coffers with $564,225 in eligible matching claims. If approved, Liu would be eligible for $3.38 million of public matching funds, paid for with taxpayer money.

Candidates must file their intent to claim matching funds by June 10, with payments made four days after the upcoming election ballots are certified by the Board of Elections, which is typically by the beginning of August, according to the CFB.

Before checks are mailed, candidates’ donations are audited to ensure that they adhere to rigorous criteria, including state election laws. Section 14-120 of the state law against straw donors says, “No person shall in any name except his own, directly or indirectly, make a payment or a promise of payment to a candidate or political committee or to any officer or member thereof, or to any person acting under its authority or in its behalf or on behalf of any candidate.”

During the trial, Jia “Jenny” Hou, John Liu’s former campaign treasurer, and Xing Wu “Oliver” Pan, Liu’s fundraiser, were shown to have recruited numerous straw donors—people who donate under their names but with someone else’s money.

Leo Glickman, an attorney with Stoll, Glickman and Bellina, who previously headed a division of the CFB and is also criminal defense attorney, predicted that the Liu campaign would communicate with the CFB to determine whether it can proceed with the matching funds program at all. If Liu’s campaign can overcome that hurdle, he can then choose which funds to make eligible for matching, predicted Glickman.

It is likely the campaign would remove the contributions in question from the trial, as well as any additional suspicious claims, and submit only those contributions deemed by an auditor as clean.

Funds eligible for matching would face tougher scrutiny. However, all monies donated to candidates are looked at, according to the CFB.

Jury Homed In on Matching Funds

The issue of matching funds appears to have been a key issue in the deliberation and eventual guilty verdict of the grand jury at Manhattan’s southern district federal courthouse.

After deliberating for nearly four hours, the jury sent a note just before 1 p.m. to Judge Richard Sullivan asking for clarification about the “object of the conspiracy.”

“Does the sole purpose of the conspiracy have to be the procurement of matching funds?” the jury asked.

According to an onsite NTD Television reporter, Judge Sullivan and lawyers for both the defense and prosecution debated the significance of matching funds for several hours.

At 3:17 p.m., having not received a response from the judge, the jury sent another note asking if the judge needed any further clarification on their question. After that, the judge ruled the issue of public matching funds was at the “heart” of the conspiracy, a term the defense objected to.

Less than an hour after that, at 4:31 p.m., the jury came back with its verdict.